Africa is still plagued by on-going conflicts in Mali and parts of the Democratic Republic of Congo (DRC).  There are security concerns in parts of Cameroon especially with the recent kidnapping of French tourists. Such security concerns are even magnified with assassinations of foreign investors in parts of Nigeria and Tunisia. There remains a serious concern on how sustainable Africa’s economic growth can last in the midst of insecurity and armed conflict.  Despite these worries, the international community has begun to look at Africa differently.

According to a report by Ivor Ichikowitz, executive chairman of the African defence engineering company, Paramount Group, in the Business Day Live, posted in early January 2013, the boss of the International Monetary Fund (IMF), Christine Lagarde was in Abidjan, the political capital of Cote d’Ivoire, and considered armed conflict as the worst enemy of Africa’s economic growth.  The IMF boss concurred that "Security is too fragile … if there is no peace, the people simply won’t have the confidence or courage to invest in their own future and neither will (foreign investors)." All the same, the IMF boss did not stop at security being important simply because it distorted economic development in Africa. Lagarde said security was fundamental for the financial stability of the whole world.

Lagarde alluded that "It’s clear that emerging countries are the motor of world economic growth." In her assertion, the IMF boss was supporting the IMF’s projections that sub-Saharan Africa will grow 5.25% in 2013, second only to Asian growing economies and well above the world average of 3.6%.

The IMF boss is not the only one to recognise the important role Africa’s economic growth and security record has to play in the world today. During the visit of President Barack Obama of the United States of America (USA) to Ghana in 2009, he acknowledged that Africa’s economic growth and security can benefit that of the USA. According to Obama, it was necessary for all and sundry, including African leaders to play their own role in making Africa a safe haven for global economic competition. Good governance is thus a necessary recipe for security, added the President of the USA.

To get such hope from leading figures in the international arena that security is germane for Africa’s problems is inspirational. Such recognition is a reflection of the role Africa has to play in the economic growth of the world. Concurring with Ichikowitz position, instead of Africa being considered as a drain, the continent is being considered as a core player of the global economy by leading figures.

As one who has had the privilege to have studied and travelled over the beautiful continent of Africa, especially from Cape to Cairo via Rwanda, I am of the view that there are high hopes for economic gains in Africa. All the same, such economic gains must definitely be backed by regional stability and peace especially in Mali and the DRC.

Africa cannot only rely on its growing sectors, such as oil, for its growth. It needs to nurture strong economic foundations spiced with peace and stability. As postulated by Ichikowitz, Africa’s anticipated  growth might be second only to that of Asia, but unlike Asian economies like China and India, economic growth is occurring in the absence of the fundamental institutional framework required to absorb that growth and channel it towards more investment in the education, infrastructure, public transport and health sectors.

In Africa, resource rent from natural resources have too often been reserved for a few elitist groups, rather than for the populace and for the growth of the private sector. Africa will remain unstable creating a fragmented terrain for postulated sustainable economic prosperity, if this scenario does not change.

Central governments in Africa and regional organisations have not acted very seriously on this problem. There is need for political disputes to be quelled. There is also need for the African Union to play a major role as a mediator in the conflicts distorting the continent’s economic growth.

Chofor Che is an associate of AfricanLiberty.org and an integral part of the Voice of Liberty initiative. He is also a Doctoral Law candidate at the University of the Western Cape and blogs at http://choforche.wordpress.com/. 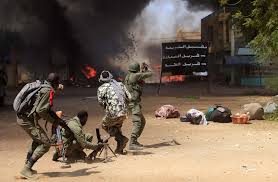