MDC-T leader Morgan Tsvangirai on Saturday told rivals pushing for his ouster that they were welcome to quit if they did not want to work with him.

The former premier told supporters at a rally held at Huruyadzo Shopping Centre in St Mary's that he would embarrass his rivals if they dared challenge him for the leadership at the party's congress.

The rally followed Friday's decision to suspend deputy treasurer Elton Mangoma who is charged with bringing the party into disrepute.

Mangoma's offence was to tell Tsvangirai that he had become a liability after losing three consecutive elections to Zanu PF while his colourful private life was not helping matters.

But as the party looks to be heading for another bitter split after the acrimonious 2005 departure of a group led by Welshman Ncube, Tsvangirai signalled he was prepared to forge ahead without Biti, Mangoma and their supporters.

"Kane pane asingade kuita fall in line, be out of line," he said.

"I have not run out of manpower, but ndirikuti kana muchida struggle yekuti uyai tiite change, ngatibvisei Zanu PF, let's work together. But if you do not want to work with me, you are free to leave."

Mangoma's lawyer Jacob Mafume said his client stayed well clear of the gathering because of "rogue elements that are prone to violence."

"Our client could not attend the rally because of some rogue elements that are intent on hurting him as was the case at Harvest House recently. He will attend other rallies as he is still a member of the party because his reported suspension is null and void," said Majome.

The leadership renewal group want Tsvangirai to step down, allowing the party call an extraordinary congress to elect a new leadership.

But the former trade unionist vowed to stay put, warning his rivals they would be humiliated if they dared challenge him for the leadership at the party's next congress.

They all took turns to describe Tsvangirai as "godfather", "father figure" and "a great leader". 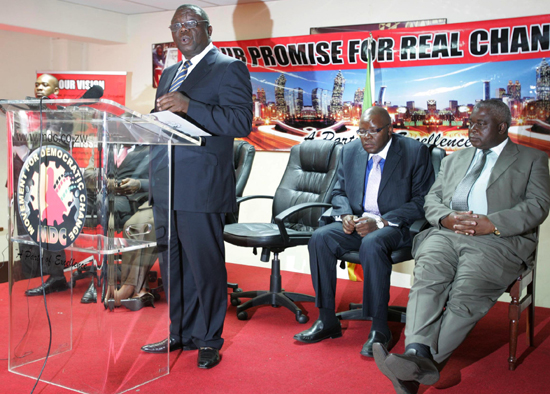