Feyi Fawehinmi: How To Make Sense of Nigeria’s Currency Swap Deal with China

Swap It, Don’t Break It

Imagine you are China. You sell a lot of stuff to the world. In fact, your whole economy is based on selling things to the world. You have an incentive to make trade as smooth as possible with other countries especially when it comes to making payments. 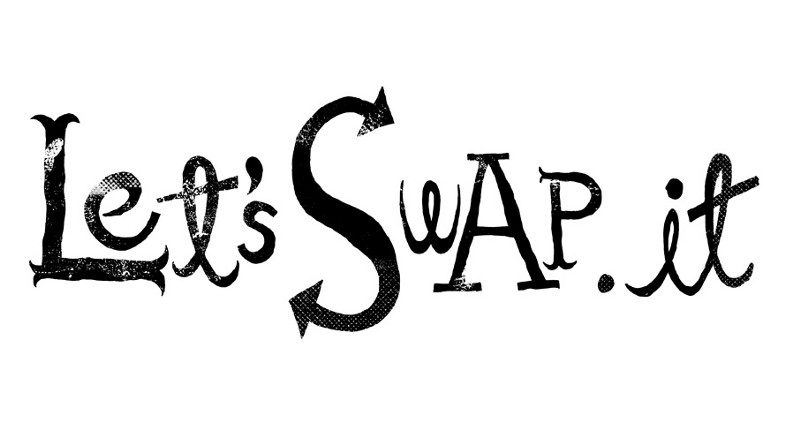 But you have another dilemma. You are not a wholly open economy. You like to control your currency as much as you can to make it undervalued in a way that benefits your manufacturers. If you let the currency trade freely like the dollar or Pound, the market will probably value it higher than you want which will make your products more expensive.

These 2 issues — trading with the world and tightly controlling the circulation of your currency — are in tension with each other. So how to solve it?

A Simple Story of Swaps

Or if you prefer the ‘technical’ name — Bilateral Currency Swap Agreements. Depending on who initiates the swap, a simplified version will work something like this.

Nigeria wants to make life easier for its traders who buy a lot of stuff from China. As Nigeria doesn’t sell much to China, it is not easy for the CBN to build up Chinese Yuan reserves. This means that for any trader who wants to buy stuff from China, they have to get prices in dollars. This adds costs and risks given that the person in China giving the quote has to convert Yuan to dollars before sending to Nigeria, bearing in mind the risk of currency moves affecting his bottom line. The Nigerian guy then has to buy dollars to make the payment to him. From the point of view of the CBN, this is extra dollar demand that can be avoided.

So CBN approaches the People’s Bank of China (PBOC) and asks to set up a swap. Xe.com tells me that 1 Chinese Yuan is currently worth about N30. So for the sake of simplicity, let’s say CBN offers to swap N30bn for Y1bn. Both of them agree an exchange rate on the day of the swap (N30 to Y1) and they make the transfer.

Now that CBN has some Yuan, it can then sell it to Nigerian banks in the same way it sells them dollars. The Nigerian trader can then tell his Chinese trading partner to give him a quote in Yuan instead of dollars. Once he has the Yuan quote, the trader can then go to a Nigerian bank and make a request for Yuan in the same way he used to make requests for dollars. Instead of the headache of dealing with 3 currencies, the dollar element is now removed and we have a normal 2-way quote.

This takes off some dollar demand pressure as people who want to buy stuff from China can face their Yuan squarely while the dollar people face their dollars. At least we get to know who is who. All of this is, of course, conditional on the amount of Yuan being swapped.

But what are the Chinese guys going to do with their N30bn? Same thing — they can now pay in naira for anything they buy from their Nigerian trading partners.

For a number of years now, the Chinese have been entering into these swap agreements with various countries on a country by country basis. The swaps typically last for 3 years after which they are renewed and/or increased. As an example, in 2012, the UK signed a swap agreement for Y200bn with China. Last year, it was extended and increased to Y350bn.

The map below shows the countries that had swaps with China as at 2015, per the PBOC 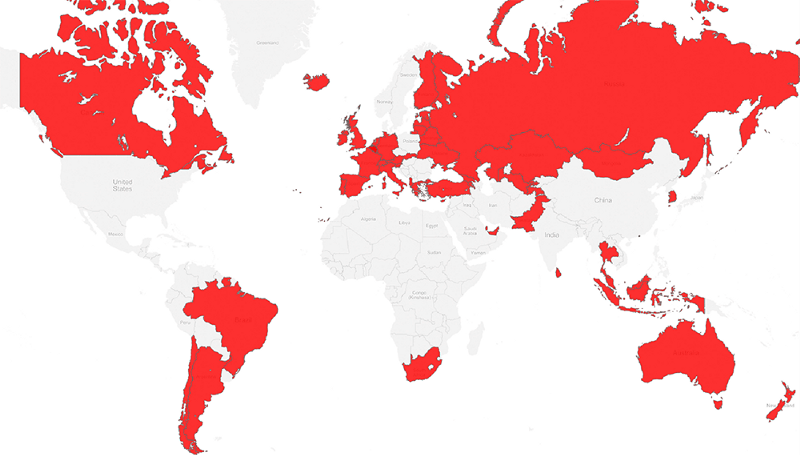 And here’s a table with the agreements and amounts swapped. 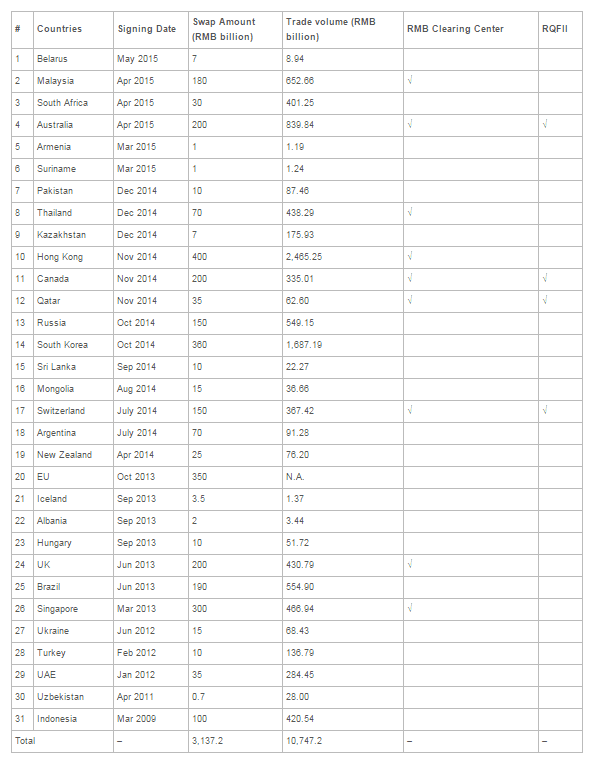 China’s swap agreements and its counterparties — 2015

As you can see, Nigeria is coming very late to the party. Perhaps, this might open the gates in Sub-Saharan Africa. It’s also clear they are done on a country by country basis depending on the amount of trade that goes on between them (although the exact correlation is not so easy to work out).

You’re probably asking — if the agreements are for 3 years, what happens at the end? In theory, both countries simply exchange currencies at the same exchange rate they used at the beginning of the swap. Returning to the example above — Nigeria will return the Y1bn to the PBOC and take back its N30bn from them. If this sounds too good to be true, it is. The person who initiated the swap will pay interest on the money it received at an agreed interest rate.

So What Did Nigeria Swap?

Given the above, inquiring minds probably want to know how much Nigeria swapped with China and when does the agreement begin? Well, this is Nigeria and nothing is ever straightforward as it should be. 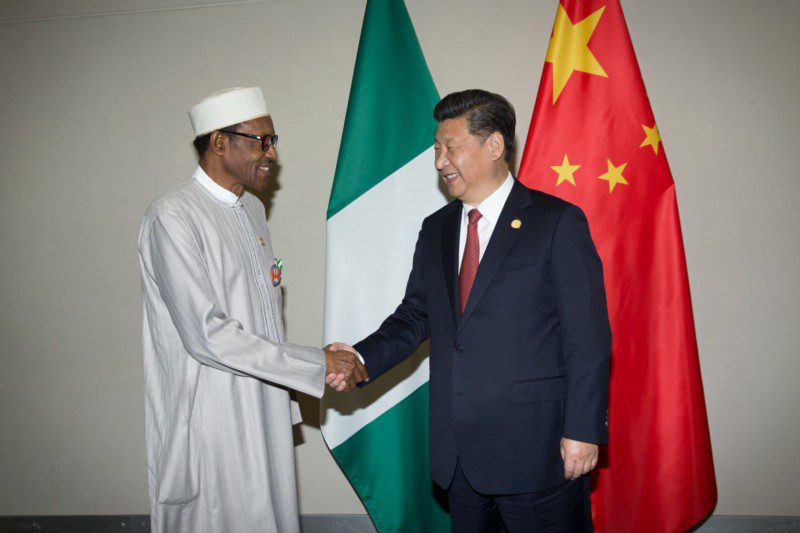 First of all, it appears that the swap Nigeria entered into was with the Industrial and Commercial Bank of China (ICBC) — the world’s largest bank by assets. That is, the CBN is not dealing with the PBOC but with a ‘private’ Chinese bank (ICBC is owned by the Chinese government).

Second, I have trawled the internet and cannot find the amount that was or is being swapped. As you can see from above, there has to be an amount swapped for it to make any sense. I have searched Chinese news outlets and even ICBC’s news page and cannot find anything on the swap let alone the amount. The news appears to have originated from Nigerian officials who briefed the media. In contrast, Dangote did get a $2bn expansion loan from ICBC and this was announced.

When They Come Back Home

So that’s that about that. Perhaps when they come back home from China, we will get more details from them. But based on this, we know what questions to ask (I’m talking to you Nigerian journalists).

Why was the swap signed with ICBC and not PBOC? How much is being swapped and for how long? And (bonus question), what is the interest rate to be paid? (We can assume the CBN initiated the swap and will be the one to pay interest on the Yuan it receives). How will the Yuan market be priced? Will it be another ‘official’ and parallel rate mess like we currently have with the dollar? This is a trick question because, if it is market priced, we shall have plenty of fun with the contradictions in pricing the dollar ‘officially’ and the Yuan by the market.

This piece was initially published on Medium.com. Republished here with permission from the author.