How fears about jobs drive anti-migrant sentiment in South Africa

This post is part of the series Xenophobia in South Africa

One of the major problems facing South Africa is anti-immigrant violence. The seriousness of this problem was highlighted in a recent report on hate crime in the country.

These kinds of hate crime discourage long-term integration of international migrants. It also hampers the country’s ability to attract migrants with the skills it needs to drive development and economic growth.

Anti-immigrant violence also sours the country’s relationship with the rest of the continent. For example, relations between South Africa and Nigeria, one of the region’s largest economies, have deteriorated because of recent attacks on Nigerians.

Since the early 1990s, state officials, legislators and policymakers in South Africa have debated the causes of anti-immigrant violence. There are many different opinions on what causes such hostility. Some politicians, including former president Jacob Zuma, even suggested that the problem doesn’t exist.

A new study by the Human Sciences Research Council canvased the views of ordinary South Africans on what lies behind anti-immigrant sentiments, including violence. Knowing how the public views this important question is vital to understanding which mechanisms would be most acceptable to prevent xenophobic violence.

Overall, 71% of the respondents said that the threat posed by immigrants from outside South Africa was the main reason for the violence. A third of people in the survey attributed violence against immigrants to the fact that foreigners would take jobs away from South Africans and that they were involved in unfair business practices attributed.

Only a small minority (5%) described violence against foreigners as irrational, illogical or unknowable. An even smaller portion (2%) rejected the premise of the question and said that attacks against foreigners were “just the work of criminals”.

The survey and findings

Using public opinion data, the study looked at which explanations for anti-immigrant violence are most popular among the country’s adults.

Public opinion data from the South African Social Attitudes Survey 2017 was used for the study. The repeated cross-sectional survey series is specially designed to be nationally representative of all persons aged 16 years and older in the country. Survey teams visited households in all nine provinces and the sample size was 3,098.

Respondents were asked: “There are many opinions about why people take violent action against foreigners living in South Africa. Please tell me the main reason why you think this happens”. This open-ended question allowed people to answer in their own words, thus encouraging them to give an unbiased answer.

Almost every respondent was able to offer an explanation for why people attack foreigners. About a third (30%) of the general public said that the violence was caused by foreigners stealing jobs from hardworking South Africans. Other economic causes cited were the alleged unfair business practices of foreign-owned small businesses and that immigrants used up resources (such as housing). 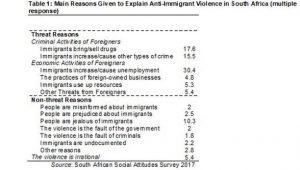 The criminal threat posed by international immigrants was the second most frequently mentioned cause of anti-immigrant violence. Almost a third (30%) said that communities were responding to the criminal activities of the migrants. Many people attributed the violence to foreigners’ involvement in drug trafficking.

About 5% of the respondents identified other threats they claimed foreigners posed as the main reason for the attacks. These included the sexual exploitation of women as well as a general sense that immigrants wanted to “take over the country”.

Looking at the minority that named a non-threat explanation for attacks on foreigners living in South Africa, the study found that few identified individual prejudice or misinformation about international migrants as primary reasons for the violence.

Remarkably, the most frequently mentioned non-threat explanation for violence was jealousy. About 10% of the respondents said that envy of the success or ingenuity of foreigners was the main driver of this kind of hate crime. People who responded in this way tended to tell fieldworkers that South Africans were lazy when compared to migrants.

From the responses, it’s apparent that most of the reasons provided by the general population are about the alleged harmful conduct of international migrants. There is, however, no evidence to support the belief that South Africa’s migrant community is a major cause of crime or unemployment in the country. Indeed, as former President Jacob Zuma has acknowledged: “Many in the migrant community contribute to the economy of the country positively.”

Government and anti-xenophobia activists need to encourage ordinary people to think like this, and to view hate crimes against foreigners differently. Public support will help anti-xenophobia advocates end these kinds of hate crime. Only when South Africans are able to understand the root causes of anti-immigrant violence can the problem be overcome.