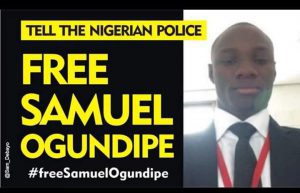 At a period the Nigerian government was complaining about the excessiveness of a abusive unit in its police force codenamed “Special Anti-Robbery Squad (SARS)”, the same police unit was forcing a journalist with a Nigeria-based online newspaper, Premium Times, to disclose identify of his source.

SARS operatives, on Tuesday, arrested and detained Samuel Ogundipe, who covers the security sector for the news medium.

Apart from Ogundipe, this online newspaper’s Editor-in-Chief, Musikilu Mojeed, and its education correspondent, Azeezat Adedigba, were also briefly detained and manhandled by the police at the SARS headquarters in Abuja, the country’s capital.

Ms Adedigba was later released after about three hours in detention.

Mojeed and Ogundipe were driven from the SARS headquarters to the Police Inspector General Monitoring Unit at Police Force Headquarters where Ogundipe was forced to write a statement to disclose the identity of its source.

It was gathered that a Deputy Commissioner of Police at the IGP Monitoring Unit, Sani Ahmadu, directed a group of police lawyers to “rush to court” to obtain a warrant to detain reporter.

The police repeatedly asked the journalist to disclose his source for a story published by this newspaper, it was learnt.

The controversial story, which was also published by other local media, revealed a letter written by the Inspector General of Police, Ibrahim Idris, to Nigerian Acting President, Prof Yemi Osinbajo, on last week’s illegal siege to the country’s National Assembly by overzealous security officials.

When Mojeed informed Ahmadu that it was wrong compelling a journalist to disclose a source of information, the police officer allegedly became furious, threatening the journalist.

“He (Ahmadu) said the police was acting within the law and that Samuel would remain detained unless he discloses those who gave him the document,” Mojeed said.

This incident happened on the day the Nigerian Acting President Osinbajo ordered the overhaul of the lawless police unit. The revamp of the police unit came on the heel of mass outcry over the unabated brutality and human rights abuse meted out to citizens by SARS operatives.

As the time of the report, the journalist is still being detained at the Nigerian police headquarters.