Between Law and Love: LGBTQ community pushes for inclusion in Nigeria 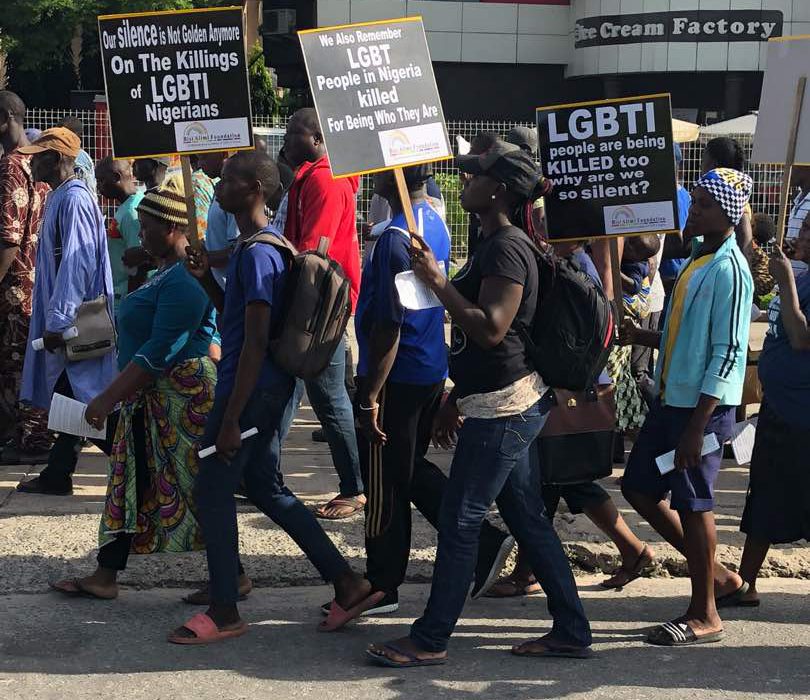 For every rational human being, finding love is, arguably, one of the best things in life. And when that love enjoys the support of friends and family, the joy is fuller.

But for Shalom Shoremi, finding love pitted her against her family. The problem? Her partner was of the same sex. As a woman, her family had expected her to bring a man home. 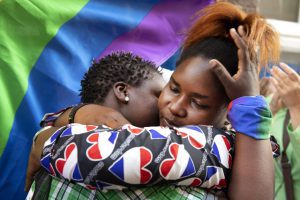 Women attend an appeal of RozeLinks in solidarity with Justine Kizito Namukisa, who fled from Uganda, to protest and to kiss at the door of the 24-hour reception of the Missionaries of Charity at which Justine is no longer welcome due to her homosexuality in Amsterdam on August 8, 2018. / AFP PHOTO / ANP / Olaf Kraak / Netherlands OUT

Regardless, Shalom requested for a special marriage license at the Federal Marriage Registry in March this year. The request was turned down. Unlike many western countries, same-sex relationships are criminalised in Nigeria.

Her family consequently disowned her. Notice of that was advertised in a national daily with her picture conspicuously displayed. Soon enough, blogs and news websites latched on to their story.

Shalom’s rejection is not an isolated case. Since the criminalisation of sexual relationships between people of the same sex in January 2014, the Nigerian LGBTTQQIAAP (lesbian, gay, bisexual, transgender, transsexual, queer, questioning, intersex, asexual, ally, pansexual, and other variants, hereafter referred to as LGBTQ) community has faced a new wave of discrimination, hostility and rejection.

The Same Sex Marriage Prohibition Act (SSMPA), signed into law in 2014 by former President Goodluck Jonathan, was enacted on the premise that the Nigerian culture is antithetical to homosexuality. With the population of the country largely divided between Christians and Muslims, there was also a religious urgency to the prohibition.

But for members of the LGBTQ community, 2014 marked a negative turning point for them. 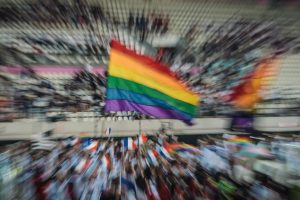 This picture taken with long time exposure shows participants of the French team holding a rainbow flag as they march onto the field during the opening ceremony of the 2018 Gay Games edition at the Jean Bouin Stadium in Paris on August 4, 2018. / AFP PHOTO / Lucas Barioulet

“Socially, people have really discriminated because they felt emboldened,” Xeenarh Mohammed, the executive director of The Initiative for Equal Rights (TIERS) said.

“They have made life harder, and they believe that, if it is a crime, then they can discriminate,” Xeenarh added.

For a fact, SSMPA enjoys widespread support among Nigerians.

A poll conducted by The Initiative for Equal Rights (TIERs) via NOI Polls, surveyed 2,000 Nigerians across the country and demographic groups, and found out that 39 per cent of Nigerians accept that Lesbian, Gay and Bisexual (LGB) Nigerians deserve equal access to public healthcare, housing and education. Despite this positive indicator of tolerance, the survey also shows that 90 per cent of Nigerians support the Same Sex Marriage Prohibition Act (SSMPA).

When the Nigerian government enacted the SSMPA in 2014, there was a popular belief that majority of Nigerians were not pro-gay rights. The spokesman to former President Goodluck Jonathan, Reuben Abati, said the law was in tandem with the “cultural and religious beliefs” of the people.

“More than 90 per cent of Nigerians are opposed to same-sex marriage. So, the law is in line with our cultural and religious beliefs as a people,” Abati said shortly after the law was signed by Jonathan.

“And I think that this law is made for a people and what the government has done is consistent with the preference of its environment.”

Essentially, the law prohibits a marriage or civil union by persons of the same sex, the solemnisation of such marriage in places of worship and the registration of homosexual clubs and societies.

It is not just the law that prohibits same-sex relations. They are also criminalised under the criminal code and in Islamic Sharia laws adopted by 12 northern states in Nigeria, including Bauchi, Borno, Gombe, Jigawa, Kaduna, Kano, Katsina, Kebbi, Niger, Sokoto, Yobe and Zamfara.

A religious leader “who administers, witnesses, abets or aids” such marriage is also liable to conviction to a term of 10 years imprisonment.

In Kano State, a person of the “male gender who acts, behaves or dresses in a manner which imitates the behavioural attitude of women shall be guilty of an offence and upon conviction, be sentenced to one-year imprisonment or a fine of N10,000 or both”. 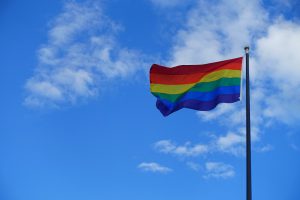 Following the passage of this bill, LGBTQ persons in Nigeria remain in fear of being hunted down like criminals. Violation of the SSMPA is punishable by up to 14 years imprisonment in Nigeria, with gay marriage and displays of same-sex affection banned. The Sharia law also includes caning or death by stoning to the punishment for homosexual acts. The law criminalises anyone who advocates or shows support for the cause.

But it is not just the law that stands firmly against homosexuality.

As mentioned earlier, the government based the enactment of the law on its affinity with the cultural and religious beliefs of the Nigerian people.

In Islam, one of the two major religions in Nigeria, homosexuality is expressly prohibited.

It is written in Quran 7:80-81 that: “And [we had sent] Lot when he said to his people, ‘Do you commit such immorality as no one has preceded you with from among the worlds? Indeed, you approach men with desire, instead of women. Rather, you are a transgressing people.’”

The then Archbishop of Nigeria, Peter Akinola, in a position paper released by the Nigerian Diocese, said, “Same-sex marriage, apart from being ungodly, is unscriptural (sic), unnatural, unprofitable, unhealthy, uncultural, un-African and un-Nigerian. It is a perversion, a deviation and an aberration that is capable of engendering a moral and social holocaust in this country.”

In the Bible, Leviticus 20:13 states: “If a man lies with a male as with a woman, both of them have committed an abomination; they shall surely be put to death; their blood is upon them.”

However, gay rights activists said the negative treatment of LGBTQ people has been strengthened since 2014. They pointed to the perpetuation of unflattering stereotypes that cast homosexuals as sexual predators and villainous. 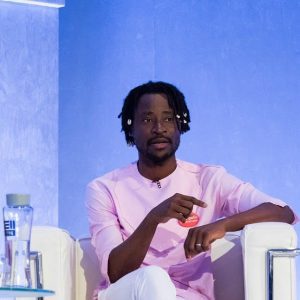 Alimi said the SSMPA violates the fundamental human rights of an individual as enshrined in Chapter Four of the 1999 constitution of Nigeria.

“There is a part of the law that says that registration of gay clubs and associations is a crime in Nigeria, I think you get 10 years imprisonment for that”.

And number two is the place that talked about that people cannot attend a wedding of someone who is lesbian or gay. That also is a violation of the rights of people to have an opinion about things.”

But Dr Ngozi Chukwu, PhD of the Department of Philosophy in the University of Port Harcourt, however, argued that the law does not violate any right. Same-sex couples, she argued, only have an “atomistic view of right,” which casts an individual as a possessor of rights and is entitled to claim such. She noted that such rights contradict the idea of universal human rights.

Apart from that thorny constitutional issue, Olumide Makanjuola, a sexual health and rights activist and a contributor to The Guardian Nigeria, said that many LGBTQ persons who were brave enough to come out of the closet have been greeted with vicious homophobia. 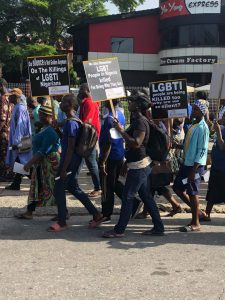 Homophobia is a common occurrence in Nigeria. A poll conducted by NOI Polls in 2015 revealed that 87 per cent of Nigerians supported the SSMPA. In 2014, research by the Solidarity Alliance revealed that 45 cases of abuse against LGBTQ people had been recorded in one year alone. More shockingly, it revealed that family, friends and neighbours had carried out 73 per cent of the attacks.

The fear and discrimination also impacted the provision of healthcare to LGBTQ persons, especially those infected with HIV/AIDS.

“People went underground, people who are in treatment for HIV, are no longer able be out in public and it has also emboldened people who have traditionally been hateful,” Xeenarh of TIERS said.

Moreover, a lot of LGBTQ persons have become victims of extortionist policemen and blackmailers who are taking advantage of the law to perpetrate crimes.

Hope for repeal of anti-LGBTQ law?

Rights activists said they believe some parts, if not all, of the law, would be repealed in the future. Although Xeenarh is cautiously optimistic about that possibility, Alimi is upbeat.

Alimi said: “I see a future in Nigeria where people will be free to love genuinely without fear, who they love.”

But an Islamic cleric and a lawyer who spoke with the reporters said that future seems bleak for sexual minorities going by the law and the norms hold by majority in the society.