Panic grips Zimbabwe amid worst economic crisis in a decade 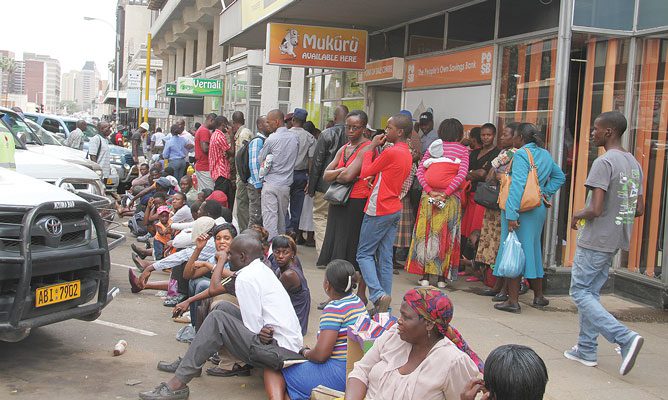 After peacefully electing President Emmerson Mnangagwa in July, many had hoped the Zimbabwe would emerge from turmoil and return to prosperity. Instead, the country appears to be imploding since the new Finance Minister introduced a raft of measures aimed at “breathing life into the country’s sickly economy.”

Now, like a repeat of 2008, long queues for fuel have reappeared and food prices have been spiralling out of control due to a currency crisis.

Government says there are enough stocks of basic commodities and panic-buying and hiking of prices was an artificial crisis aimed at profiteering and pushing some hidden political agendas.

Secretary for Information, Publicity and Broadcasting Services Mr Ndavaningi Mangwana said Government was on top of the situation.

He urged people not to be swayed by fake social media news and stop the bulk buying madness.

“Let me assure the nation that there will not be any shortages. The Government is on top of the situation and the forex supplies are adequate enough to meet our needs.

“Circulation of fake news on social media that incite people to engage in bulk buying has resulted in some artificial shortages.

“It is based on profiteering, which is greed. There is also an element that this could be political.

“Surely, what is the connection between a mere announcement of the 2 percent mobile transfer tax and the hiking of prices from $3 to $11?

“I urge the people of Zimbabwe to stop panic buying. Remain calm and engage with the Government where necessary,” he said.

“There is enough fuel. There is, at anytime, over 300 million litres of fuel at Msasa depot. The foreign currency that was needed to release the fuel from the Msasa depot where it was bonded, was availed.

“People are only queuing because there is fuel at the stations. People are surging, going in numbers to fuel up. People are going with their drums to fill up after fake news that there will be a shortage. Such long queues are expected,” he said.

The Confederation of Zimbabwe Retailers (CZR) has urged retailers that still have stocks to ensure efficient distribution of the available goods and ration them to ensure wide access while decimating any hoarding tendencies emerging out of opportunism, panic and lack of confidence in the market.

CZR President Denford Mutashu said they are currently having urgent meetings with all stakeholders involved with a view to finding lasting solutions that will help resolve the situation.

“CZR is currently having urgent meetings with all stakeholders involved with a view to finding lasting solutions that help resolve the situation. Consumers are also encouraged to respect their responsibility to consume goods in a sustainable way so that others can have their needs met as well.

“CZR regrets that one of the immediate impact of the current situation is the suspension of operations or closure of a number of shops, ranging from restaurants, fast foods, grocery shops, pharmaceuticals, clothing shops, hardware and others – due to lack of supply, FOREX shortages and price increases which have made it impossible for them to replenish their dwindling stocks and retain value,” he said.

He added that the situation might result in more shops closing down as well as empty shelves for the ones remaining open, and the emergence of a black market for basic goods if not attended urgently.

“Anyone pricing above these regulated fuel prices is doing so illegally,” Mohadi told the media.

“Price monitors are on the ground monitoring the situation. All those caught selling fuel at prices not approved by Zera (Zimbabwe Energy Regulatory Authority) and those service stations either demanding payment in hard currency or engaging in other untoward trading practices will have their licenses revoked.”