How to Make an Instant Trillionaire, One Year after Mugabe 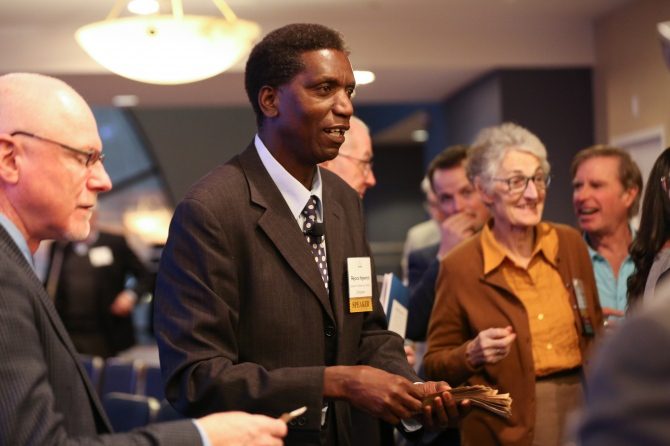 At the recently concluded Atlas Liberty Forum and Freedom Dinner in New York, an annual event that brings together friends and champions of liberty from around the world, making an instant trillionaire was not a problem – at least with a few Zimbabwean dollars.

In the Atlas Network’s Top 10 Moments published earlier this week, they gave a succinct summary of what happened in the picture above: “When speaking on the panel titled “Advancing Freedom in an Unfree World,” Rejoice Ngwenya of the Coalition for Market and Liberal Solutions in Zimbabwe handed out 100 trillion Zimbabwean dollar bills to highlight the rampant inflation of the country and the need for sound money.”

But, my message for Africa is clear: Bad governance, authoritarianism and deliberate violations of property rights have far-reaching devastating consequences than we often predict.

Well, that was as simple as it could be summed up. However, for the millions of Zimbabweans still reeling from the ordeal of bad economic policies of the ousted dictator, Robert Mugabe, the lasting legacy is too hard to be put simply.

Dishing out old Zimbabwe bank notes abandoned and discarded over ten years ago due to record-breaking hyperinflation might seem like a reckless act of crude sarcasm. But, my message for Africa is clear: Bad governance, authoritarianism and deliberate violations of property rights have far-reaching devastating consequences than we often predict. And one of those consequences, as proven in the case of Zimbabwe, is that money could easily become so useless one could have a trillion and still be unable to buy a bowl of soup.

To take us back a ittle, in 2008, Mugabe allowed his crony Reserve Bank Governor, Gideon Gono, to abuse the national treasury by printing millions of worthless currencies to mitigate uncontrolled government expenditure. The government itself had spent millions of dollars in a non-productive political cruise to entrench the dictator’s hold on levers of influence. The result was a 79,600,000,000 percent hyperinflation rate in mid-November of the same year – the second highest recorded only after post-World War II Hungry in 1946.

As goods disappeared from the shelves due to shrinking industrial productivity, citizens withheld the little foreign currency they had and traded it on the black market in a Venezuela style inflation output.

People had learned the hard way: confronting the market forces distorts the monetary system, no matter how solid the plan.

Starved of foreign currency, Mugabe needed to oil his waning political machine. He ordered Gono to indulge in incessant money printing until hyperinflation reached a trillion percentage point. It did not matter how many zeroes were eliminated from the currency, or the size of the bills printed, Mugabe could not contain the deluge of inflationary pressure afterward.

This dramatic but catastrophic period extended from 2004 until 2009 when Zimbabweans, with the help of market forces, rejected the proxy currency and opted for the US dollar. The government had made innocent Zimbabweans learned the hard way. They realized that confronting market forces distorts the monetary system, no matter how solid the plan. Besides, the damage inflicted on the country’s economy by state-sanctioned quasi-fiscal activities is almost irreversible.

Finding the next chapter

Meanwhile, despite the good intentions of the current president, Emerson Mnangagwa,  the isolation of Zimbabwe as a no-go-area for investors during most part of Mugabe’s 37-year rule, badly damaged our monetary system. Populist land expropriation drove out commercial farmers and decimated industries and banks. Gross human rights violations worsened the country’s risk status and attracted sanctions from not only the Bretton Woods Institutions but also the rest of the western world.

Some even went as far as political sanctions on individuals in the Mugabe administration, just to underscore how furious the world saw the fiscal irresponsibility of the president.

Nonetheless, spirited attempts at attracting Foreign Direct Investment, triggering an industrial and agrarian revolution, narrowing the budget and trade deficit by Mnangagwa has yielded no results either, hence the need for a completely liberal approach to things. The ZANU.PF brand is damaged property. It is undoubtedly one that will require robust pro-market readjustments for the international business and finance communities to consider again.

Economics
Why ZANU-PF owe Zimbabweans some Explanation on the country’s Debt
Opinion
Zimbabwe: Where Constitution Fails to usher Freedom
Opinion
Why the Misery of Long Fuel Queues in Zimbabwe?