Steve Hanke, a Professor of Applied Economics at The Johns Hopkins University and a Senior Fellow at Cato Institute, recently released the latest edition of the Misery Index. The index rank countries from happiest to most miserable. According to Hanke, he arrived at this ranking by considering the “sum of unemployment, inflation and bank lending rates, minus the percentage change in real GDP per capita.” Among the countries ranked in his 2018 edition, Nigeria, South Africa, and Egypt are in the top 10 of most miserable countries. But their poor placement isn’t surprising considering the indicators Hanke used.

Nigeria, for instance, has one of Africa’s highest unemployment rate with 23 percent of its population—18 million of the labor force—currently without jobs. South Africa is worse at 27 percent. The inflation rate in both Nigeria and Egypt are 11 percent and 14 percent respectively. Surprisingly, the closest African countries to the miserable end of the ranking are Algeria (22nd), Mauritius (31st), and Mali (43rd). 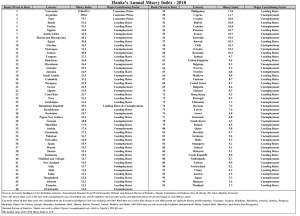 How Nigeria and South Africa got Here

A combination of bad fiscal policies and heavy restriction on business has triggered a proportionate increase in the unemployment rate in Nigeria, which reached a record high 23 percent in July 2018. Large shipping companies like Mitsui O.S.K Line, Nippon Yusen Kasha, Taiwan’s Evergreen Line, Messina Line, Hapag-Lloyd and Gold Star Line (GSL) left the country due to harsh import policies in 2016. Also, the foreign exchange restriction imposed on 41 items by the Central Bank of Nigeria in 2015 forced 272 businesses to shut down within 10 months, leading to the loss of over 180,000 jobs. And more recently, HSBC and UBS closed their offices in the country fearing worse fiscal policies after the re-election of President Muhammadu Buhari.

An HSBC research that informed the decision noted that Buhari’s second term “raises the risk of limited economic progress and further fiscal deterioration, prolonging the stagnation of his first term, particularly if there is no move towards completing [the] reform of the exchange rate system or fiscal adjustments that diversify government revenues away from oil.”

Unemployment rate in Nigeria since January 2016 according to TradingEconomics.com

… the senseless policy of land expropriation without compensation made many investors skeptical of the fairness of South Africa’s business environment and refused to increase investments.

Significantly, though, the fall of oil price in 2015 forced Nigeria into a painful recession. The sudden reduction in oil revenue left many government welfare programs crashing, and public workers went months without salary. The downturn led to more job loss and nearly every citizen felt the pain. South Africa’s situation is equally worse.

Hanke identified unemployment as the primary cause of the country’s poor placement. Among the 38 million people of working age, 6.2 million are unemployed and 15.4 million are not economically active. Also, the South African Rand greatly lost value in the last few years with devastating effects on the price of import goods. Many businesses that depend on these imports recorded loses and have in turn laid off thousands of workers. Others simply had to shut down.

Unemployment rate in South Africa since January 2016 according to TradingEconomics.com

On the non-financial side, the senseless policy of land expropriation without compensation made many investors skeptical of the fairness of South Africa’s business environment and refused to increase investments. Other businesses directly linked to agriculture were affected and the economy might not even recover anytime soon. Only a few days ago, the International Monetary Fund lowered its forecast for South Africa’s economic growth to 1.2 percent in 2019 and 1.5 percent in 2020 citing political and policy uncertainties.

Large Economy does not Equals Happiness

Nigeria and South Africa are among the largest export economies in the world. The population of their labor force alone are staggering—Nigeria has 58 million and South Africa 38 million. Both countries are also exporters of two of the world’s most sorted after commodities: oil and minerals. Nigeria earns more than $43 billion annually from crude petroleum and gas exports, while South Africa has an annual export total of $69 billion. But these earnings has not saved citizens of both countries from being miserable.

Last year, Nigeria overtook India as the country with the highest number of people living in extreme poverty. Equally, more than half—30 million—of South Africa’s 56 million population currently lives below the poverty line. Whereas, both countries have to significantly eliminate corruption and reduce heavy state regulations on businesses to make their people happy.

Although the Buhari administration is fighting corruption in Nigeria, its partisan attitude is hindering good impact. President Cyril Ramaphosa is also genuinely doing well to rid South Africa of corruption, but his people believe that corruption is only increasing.

Hanke is right nonetheless. Nigerians and South Africans cannot be happy in light of the many problems they have to deal with. But as he pointed out, “happiness tends to blossom when growth is strong, inflation and interest rates are low, and jobs are plentiful.”

Ibrahim B. Anoba is the editor of AfricanLiberty.org. He can be reached on Twitter: @Ibrahim_Anoba.