Let My People Go: How Africa Can Save Itself

The people of Africa have been subjected to multiple injustices, slights, and violence. The list of things inflicted on Africans is endless and has no modern equivalent, except for Asia in geographical terms and the Jews in ethnic terms. These multiple injustices have been inflicted by both outsiders and Africans themselves against one another.

What happens when people are repeatedly, consistently brutalized based on their race? Their history marginalized and cast away as nothing? What happens to the individuals who have to build themselves up from these ashes? I would submit that there will be quite a bit of self-doubt. You would expect that the self-esteem of these people will be lower than ordinary.

Indeed, that is exactly what one sees in Africa. Entire nations are affected by this lack of self-esteem. There’s a knee-jerk response of not taking responsibility for our own actions. Politicians exploit these tendencies to get away with the most horrendous crimes because they are black like us; and therefore, can’t harm us, you see?

Africans need to realize the nature of the world they live in. No one in the world is walking around thinking about how to give us back our sense of self. No one really cares, and nor should they, since they are busy dealing with the problems that are immediate to them. 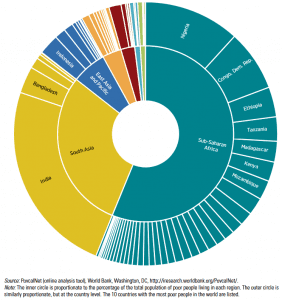 We need to understand that no one has to take Africa seriously because we are an economic nonentity. Even as the rest of the world discovers and uses the ideas that are necessary for a prosperous society, poor, low self-esteem Africans are busy pursuing socialism because their politicians tell them that to be black means to give power to politicians. That is what socialism is: It appropriates to the state (politicians) what rightfully belongs to private individuals. Nationalization and expropriation serve that purpose.

This sickness is nothing more than a manifestation of our own insecurities. Understandable as this inferiority complex is, we have to find the strength to get rid of it. No one is coming to save us, and the rest of the world is leaving us behind.

In a sense, modern Africans are perpetuating the very worst of colonialism. By this, I mean the idea that black Africans are inferior because they do not create anything of value. We now know this to be untrue historically, but ancient Africans did not have to deal with an inferiority complex. We are proving the worst racists to be correct by failing to trust each individual to take charge of their own destiny and instead entrusting it to government.

Another manifestation of these negative psychological tendencies is the hate we have for each other. In South Africa, we see this in the xenophobic attacks against dark-skinned people from other parts of Africa. In Nigeria, the President just signed an order that no foreigners will be allowed to do a job that a Nigerian can do.

It is strange that most African leaders preach Pan-Africanism but practice protectionism within Africa. Europeans, on the other hand, don’t have a strong philosophical concept of Pan-Europeanism, but they nonetheless trade freely with one another and trust their people to act as individuals in a relatively free market. Is there something wrong with us when our words can’t even match our actions in something as simple as opening up borders?

The solutions to Africa’s problems will not come from a class of leaders sitting above everyone else and being driven around in German cars. It will be solved by each and every African being allowed to define their own destiny. It will take, simply, private property rights and free markets: The only thing that has ever created anything close to the prosperous country of Wakanda in the Marvel movie Black Panther.

To do these things, we need Africans who have a sense of self-confidence. Who trust in themselves to create and produce without having to rely on the group to hide their mediocrity. Africans who believe they are the equal of anyone in the world (and maybe a little better) and can trade, play, and debate with anyone else.

Experiments with collectivism are destroying the hope of a new generation of Africans. These range from socialism, nationalism, ethnic tribalism, etc. In none of them do you find the African individual; all you find is a group of our very worst people making decisions for everyone else.

The people of this continent need their own enlightenment. Not an import of what Europeans did necessarily, but to start thinking and recognizing that the individual is always the basic unit of society. Individuals can only express what is best within them if they are given the maximum freedom to pursue whatever their version of happiness is. This also means every other individual has exactly the same freedom.

Freedom belongs to every individual. Limiting it on the basis of nationality, race, ethnicity, etc. always destroys everyone else’s freedom. This is because every limit equates to more power given to the government. It means politicians can do more against certain individuals and everyone else can do less with and for the same individuals.

I am tired of a poor and dejected Africa. I am tired of emotional rhetoric that gets us nowhere. I want to be part of the generation that gets to the promised land. For that to happen, it will take hard work but most importantly it will take freeing the potential of the magnificent people living on this continent; whatever their tribe, race, religion, gender, or sexuality is.

Mpiyakhe Dhlamini is a data science researcher at the Free Market Foundation.