South Africa is Gradually Killing its Own Broadband Economy

Access to more data is vital for economic growth and education. Young people spend more and more time on mobile devices—the fewer regulations and the more competition we have in South Africa, the more they will be enabled to access a whole universe of educational resources. The government can either aid in empowering young people by letting go of control over data, or it can inhibit a real, transformative, empowering process by bumbling from spectrum allocation ‘deadline’ to ‘deadline.’ The choice and unlimited potential are clear: massive pressure must be put on the government to get radio spectrum allocated.

The latest Data Service Market Inquiry by the Competition Commission is being conducted because the former Minister “requested that the Commission conduct a market inquiry into the state of competition relating to the provision of data services.” The Minister was concerned about “high data costs.” The effect of the inquiry will not be to lower data costs; it is in the nature of government inquiries into the supposed ‘lack of competition’ that they recommend more regulations, not fewer. This means higher costs for businesses in the data sector, and, in turn, higher costs for consumers. 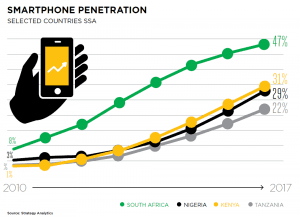 Job creation, economic transformation, the lowering of data costs, and technological innovation, are being hamstrung by government inefficiency and meddling. Our data and communications are falling further and further behind the development curve. Those who talk about the importance of the 4th Industrial Revolution, do not realize that government stands in the way of it ever happening. In Parliament on 10 July, Communications Minister Stella Ndabeni-Abrahams said that her department would publish a final policy direction to the Independent Communications Authority, ICASA, to allow for the licensing of “high-demand” spectrum. If the government’s track record is anything to go by, many (if not all) of her proposed deadlines will probably fall by the wayside and the blame will be laid at the feet of the data providers.

If not for investments by MTN, Vodacom, and Cell C in 4G/LTE networks, South Africans would still be using 2G or 3G. Indeed, the only reason we have 4G and LTE is that these companies were forced to allocate (‘reform’) 2G and 3G towers to 4G. This deprives a great number of people with old and cheap phones of services. Freeing spectrum would allow more competition with and by established network providers. The biggest problem is that the digital dividend bands, which should be freed, are being used by outmoded spectrum-hungry analog TV broadcasters, especially SABC. Government regulations are preventing data prices from falling. How SA’s broadband speeds compare to the rest of the world.

Regarding South Africa’s migration from analog to digital terrestrial television, the Minister also promised to fast-track change. She promised a “renewed” broadcasting digital migration model within 90 days. Regardless of whether the deadline is met, there is a much deeper problem; government control, via the Competition Commission and ICASA, means that private businesses in information and communications technologies (ICT), telecommunications and data, must operate under a cloud of uncertainty. Companies such as MTN, Vodacom, and Cell C, could invest in more infrastructure, but they will not do so if they may be punished for implementing business plans.

The former Minister of Communications, Nomvula Mokonyane, promised that the migration to digital TV would be completed by July 2020. But SA was meant to have completed digital migration by mid-2015. There is no reason to believe that the department will adhere to the 2020 deadline. The delay of this migration inhibits private sector growth. It does not inspire industry confidence to be told, once again, the migration will be ‘fast-tracked’, when it has been neglected for many years.

President Ramaphosa often refers to the 4th Industrial Revolution and its importance. The term and potential of 5G are also bandied around. But these concepts remain unattainable pie-in-the-sky if the spectrum is not freed to allow companies to use it efficiently and to compete freely for the custom and benefit of consumers. As long as the government retains excessive control over ICT and telecommunications, the development will be retarded. Furthermore, government control allows for bias, which increases the probability of abuse and corruption.

Data is the oil of today, and indeed of the future. It is too important a resource to be messed with by government inefficiency and bureaucracy. We are in the 21st century, not feudal Europe where kings controlled people’s lives. The government must step out of the way of the private sector and allow technological progress to flourish. For SA, as a developing economy, the opportunities are endless. Access to data will increase, and prices will fall, only if the government steps out of the way and allows companies to have more spectrum and compete more freely.

Chris Hattingh is Project Manager, and a Researcher, at the Free Market Foundation. He has an MPhil in Business Ethics from Stellenbosch University. He is the author of published articles on consumer rights, economic freedom, inequality, and individual freedom.