Only Free Trade Will Save Africa

Trade between people is one of the greatest ways to increase prosperity around the world. We each bring different skills and resources to the table, and specialization has resulted in the lowering of costs of all sorts of goods. Whereas the best products and services used to be the domain of only rich kings and queens, globalization and free trade have democratized capital and the spread it so effectively that we often take for granted how privileged we are.

Around some areas of the world, politicians are decrying trade; however, their countries and economies are already well-developed. For Africans to tap into their unlimited economic potential, there need to be as few barriers to trade as possible, across the continent. The African Continental Free Trade Agreement (AfCFTA) is a fantastic step in the right direction for Africa; the direction of free markets.

The AfCFTA was recently launched at the African Union summit in Niger. The agreement will cover a market of 1.2 billion people and an estimated gross domestic product (GDP) of US$2.5 trillion, across all 55 member states of the African Union. 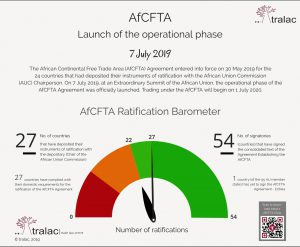 Part of the debilitating effect of colonialism across the African continent was the entrenching of barriers to trade between African countries, and with other continents. The much-talked-about economic potential of Africa will remain underutilized for as long as it is difficult for people to trade with each other. A myriad of trade regulations and tariffs make trade between African countries extremely cost- and time-intensive. The AfCFTA sends exactly the right message: that Africa is business-friendly and hungry for trade.

According to Marian L Tupy, Senior Policy Analyst at the Cato Institute, the economy of “sub-Saharan Africa (SSA) is small, accounting for some 2 percent of global Gross Domestic Product (GDP). Between 1960 and 2017, SSA GDP grew from $252 billion to $1.75 trillion. The world economy grew from $11.3 trillion to $80 trillion (all figures are in 2010 US dollars).”

How can we grow SSA’s GDP? One of the least complicated and fast-acting methods is to lower trade barriers as much as possible. Capital flows much faster along the path of least resistance, and the more barriers we remove (along with implementing pro-growth and pro-individual freedom policies) the faster capital investment will flow into Africa. Economic growth and job creation will result.

With the AfCFTA, Africa can become the world’s largest free trade area. But the promise of this much economic potential must not be undermined by political interest groups in the various countries whose goal is to control, not freedom. Indeed, the political trend in South Africa has been towards more and more government control over people’s lives. South Africa is currently ranked 110 out of 162 countries in the Fraser Institute’s Economic Freedom of the World (EFW) report. And the downward trend in terms of economic freedom is reflected in people’s lower quality of life. 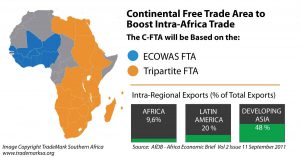 For transformative economic growth to take root in both South Africa and across the continent, protectionist barriers to trade need to be eliminated. Backed by strong systems of individual property rights and the rule of law, both local and foreign businesses will feel more secure when investing in Africa; arbitrary seizure (as would happen if expropriation without compensation is adopted) must not be entertained. For far too long the property of Africans, their goods, businesses, and wealth, have been under threat by politicians in their own countries.

The AfCFTA will not solve Africa’s economic problems overnight. Serious reforms must be enacted if the continent is to become truly economically free. However, if the AfCFTA provides the momentum for things such as lower tariffs and simpler customs procedures, it will definitely be a step in the right direction. Increasing trade across the continent will push more African countries higher up on the EFW index. A higher score reflects an economy that respects the rights of individuals and families to make their own decisions about their lives and money and to try and improve their own lives as best they can. Having access to more goods and services will empower Africans far more than any government handout or statist policy ever could.

Chris Hattingh is Project Manager, and a Researcher, at the Free Market Foundation. He has an MPhil in Business Ethics from Stellenbosch University. He is the author of published articles on consumer rights, economic freedom, inequality, and individual freedom.