The Apartheid in Expropriation Without Compensation

Instead of righting the wrongs of apartheid, Expropriation Without Compensation (EWC) will perpetuate the evils. Apartheid’s greatest travesty, of which one of the worst legacies is the specter of EWC today, was expropriation without compensation of black held land. Instead of ensuring that it will never happen again, EWC will plunge black South Africans back into their grotesque past. What must change is the opposite of that proposed: namely all land and property held by black people should become fully owned and protected against any form of expropriation. It will not be the wealthy, predominantly white, suburbs of Sandton that will be affected, but yet again, poor black people living in rented, low-quality housing or shacks who will feel the pain.

Government rhetoric implies that EWC will apply only to white commercial farms. This is not what the proposed amendment would entail. If the existing protection is removed, as is proposed by the Presidential Advisory Panel on Land Reform and Agriculture’s report released on 28 July, any future government will be free to seize any property – not just land – regardless of short-term assurances to the contrary. Free Market Foundation’s Executive (FMF) Director Leon Louw puts it right:

The EWC debate creates the impression that it is about white rights. It is not. The overwhelming majority of victims of expropriation without compensation has always been and will always be black South Africans. This cannot be allowed to continue. The most vulnerable group in society needs the continued protection of the Constitution, not the meaningless promises of current politicians who, even now, have no control over whom implements the power to expropriate at the lowest levels of government. They have no control over, and have no idea who will wield the power, of expropriation now or in the distant future.

Unless expropriation without compensation is strictly confined to the restitution of land taken under apartheid, it will unleash a staggering potential for personal vendettas, corruption, and victimization of political adversaries. The awesome power placed in the hands of junior unaccountable officials throughout the country is terrifying, not just for whites, but for every black South African.” 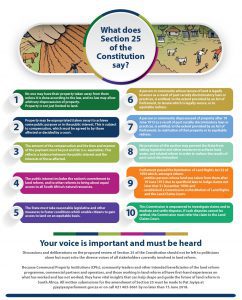 Expropriation without compensation against black people did not end with apartheid but occurs on a daily basis to this day. Expropriation for public works, such as roads, dams, harbors, power stations, parks, schools, and nature reserves happens continually. White-owned land in the path of expropriation has always been and still is fully compensated for, because white people had, and continue to have, full constitutionally protected freehold ownership, and most have the wealth with which to defend themselves in court. Most black people do not have these luxuries.

This dangerous amendment is already proving a disincentive to foreign investment—desperately needed in SA for growth and jobs. This will lead to even higher levels of unemployment than the 10.2 million, 38.5 percent of the potential workforce (expanded rate), announced this week.

Overseas investors have sold a net $4.8 billion of South African equities and bonds in 2019, the highest rate since 1998.

Expropriation without compensation will undermine and reverse the extraordinary progress achieved for all South Africans since apartheid and reverse much of the gains for which South Africans fought, and many died. It should be abandoned and land reform pursued under the powerful protection of the Constitution.

Through the Khaya Lam land reform project, the FMF continues to fight for property rights for the millions of South Africans who, even today, still do not enjoy freehold title. Giving title deeds to the millions of black citizens living as tenants on municipal land would end apartheid dispossession and create more black than white landowners.

Temba A. Nolutshungu details the history and work of the FMF’s Khaya Lam land reform project.

Continue reading this series:
The Irrationality of Expropriation Without Compensation

Economics
SA’s Economy will only Grow if Liberated from the State
Opinion
Indeed, South Africa needs an Independent Ports Authority
Policy and Research
‘Abandonment’ in the 2020 Expropriation Bill