The 2014 Rule of Law Index report has this to say about the importance of the rule of law to a country’s business environment:

Imagine an investor seeking to commit resources abroad. She would probably think twice before investing in a country where corruption is rampant, property rights are ill-defined, and contracts are difficult to enforce. Uneven enforcement of regulations, corruption, insecure property rights and ineffective means to settle disputes undermine legitimate business and drives away both domestic and foreign investment.

What this makes clear is that the rule of law is a necessary prerequisite for economic progress. An essential component of the rule of law is the existence of impartial courts where disputes are resolved fairly without favoritism to one of the parties. This is important for the economic welfare of individuals in a country because no modern economy can survive without individual property rights or contracts.

The World Economic Forum’s (WEF) Global Competitiveness Report seeks to measure the impartiality of courts in different countries. Through their executive survey, the data is collected and then used as one of the Economic Freedom of the World (EFW) report’s component variables. 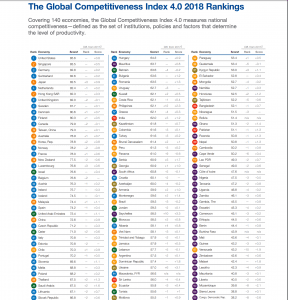 I have done a regression analysis to determine the five most important components of the EFW in bringing about short-term (1 year) growth in the per capita GDP. It turns out that the impartial courts variable mentioned above is one of these. I found that maximizing a country’s score on this sub-component could add as much as 0.37 percentage points to GDP per capita growth. This is hardly surprising.

Countries with courts that are subject to political persuasion are likely to prove inadequate in protecting private property against malicious government officials. In Zimbabwe, many white farmers appealed to the courts after their property had been seized by military veterans but law enforcement turned a blind eye, the courts were politically partial, and economic ruin soon followed.

South Africa has done relatively well, ranking 34th in the world in terms of this sub-component. Given this country’s urgent need to grow the economy, create wealth and get people out of poverty, the government should be aiming to take top spot in the world. Our current variable score is 5.45, while Finland, the top-ranked country, scores 7.98.

It’s possible for us to have the highest score in the world if, for instance, we aim at depoliticizing our judicial selection process as much as possible. While we have a reasonably high score relative to the continent (ranked 4th in Africa after Rwanda, Mauritius and Namibia), the Judicial Services Commission (JSC) process still has some political bias built-in due to the nature of the interview process. Another possible reform would be to require political parties to nominate legal professionals of suitable experience to serve on this crucial body rather than politicians.

Looking at the Finnish Judicial Appointments Board (JAB), their equivalent of our JSC is made up of members of the judiciary (seven representing the different types of Finnish courts), one advocate nominated by the bar association, one prosecutor nominated by the Prosecutor General, and one legal academic. In contrast, South Africa’s JSC is made up of three members of the judiciary, two advocates, two attorneys, one professor of law, ten nominees from Parliament, and five nominees from the President which includes the Minister of Justice.

In other words, our twenty-three membered JSC has more political appointees (fifteen) than professional and academic appointments (eight). Finland’s JAB is made up entirely of members of the judiciary, legal professionals, and a legal academic. This is something South Africa should learn from the Finns.

Making our courts impartial will not only help with growing the economy and raising living standards, but it will also go a long way in dealing with corruption. Of course, making our courts impartial, on its own, will not ensure the rule of law but given the importance of the rule of law in the economy, this would be as good a place to start as any.