South Africa is Losing almost 3 Decades of Progress with EWC

South Africa’s flirtation with the idea that government should be allowed to expropriate private property without being legally required to compensate owners for it stands in stark contrast to the constitutional democracy we chose 26 years ago and is already doing great damage to the economy.

This is according to a case study conducted by Free Market Foundation (FMF) researchers Jacques Jonker and Martin van Staden for the Property Rights Alliance’s 2020 International Property Rights Index (IPRI).

Van Staden, who presented the case study at IPRI’s international launch, had the following to say:

“The world recognised the injustice of Apartheid and put immense pressure on the South African political class to reform. Between 1990 and 1996, South Africa reformed and adopted a constitutional dispensation that recognised and protected the private property rights of all South Africans regardless of their race. South Africa no longer occupies such a prominent place in international discourse, but perhaps it should, because these gains won at the end of Apartheid are now being undone by the apparently democratic government.”

The case study notes the importance of restitutionary land reform in the post-Apartheid context: those who have been deprived of their property during the tenure of the previous regime must be able to claim that property – or an amount in money of comparable value – back as a matter of justice. But this is not why the government is pursuing expropriation without compensation.

Instead, the government has an agenda, at best, of redistribution, and, at worst, of nationalisation. Redistribution means that government seizes the property from its true owner (as opposed to a thief possessing stolen land) and hands it out to someone else, usually a politically connected cadre. Nationalisation means the government simply keeps the property for itself and leases it out to someone else, also usually a politically connected cadre. Neither of these phenomena amounts to restitution as the originally dispossessed party is not the one receiving ownership of their property back – rather, a random third party, or government, is receiving property that was stolen from its legitimate owner.

Even before the Constitution has been amended, the consequences of expropriation without compensation are already being felt. The case study, for instance, notes the reports that demand for affordable housing declined by as much as 40%, hitting the affordable home market hard. Experts believe this happened because those who would usually buy property in this sector have now been lulled into believing the government is going to seize land from others and give it to them in full title.

Even if the Constitution is amended, however, we know the government will not hand over land, in ownership, to the needy. In Zimbabwe and Venezuela, where expropriation without compensation has been tried in recent years, only those close to the government have benefited.

Furthermore, it has been reported that most South African commercial farmers have scaled back on their investments in their agricultural infrastructure because they foresee the government in the future seizing their property from them without compensation. No rational person would invest time, money, and effort into something they know might soon be taken from them. 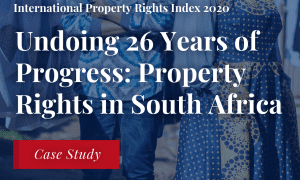 The FMF view that it is imperative that any notion of expropriation without compensation be abandoned forthwith is not only based on grounds of constitutionalism and liberty but also because it will wreak havoc on the South African economy comparable to, if not worse than, the damage done by the COVID-19 lockdown.

The case study also includes a chapter on the protection of intellectual property rights, which is being threatened by the controversial Copyright Amendment Bill. This Bill must similarly be abandoned if South Africa hopes to foster innovation and be a notable part of the fourth industrial revolution.

The FMF is an independent, non-profit, public benefit organisation, created in 1975 by pro-free market business and civil society national bodies to work for a non-racial, free and prosperous South Africa. As a policy organisation it promotes sound economic policies and the principles of good law.

Photo by Dan Roizer on Unsplash.