A Critical Appraisal of Cameroon’s Declaration and Payment of Taxes

The Nkafu Policy Institute is delighted to share with you the results of a report that critically appraises the declaration and payment of taxes in Cameroon. Indeed, since 2004 the Doing Business Index (DBI) of the World Bank has been ranking national economies based on their performance in several domains. One of these domains includes the “paying taxes” indicator. It records taxes and mandatory contributions that medium-size companies must pay in a given year
and equally measures the administrative burden of paying taxes and contributions and complying with post-filing procedures. Therefore, the weight of the tax burden remains a decisive element in the attractiveness of an economy as it encourages or dissuades national and foreign investors, widens or reduces the tax base, stimulates or refrains entrepreneurship.

Based on this background, this report seeks to answer the questions: 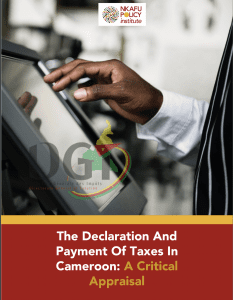 This thematic report comprises four chapters, including policy recommendations. The first chapter looks at Cameroon’s past performance in the “paying taxes” indicator from 2007-2020. Cameroon’s rank is analyzed in section one while improving future ranking is suggested in section two. Chapter two examines the influence of tax regimes and the general tax code on entrepreneurship. An overview of the tax regimes and the general tax code is provided in section one, whereas the effects of taxation on entrepreneurship are scrutinized in section two. Chapter three focuses on the governance perspective as regards tax declaration and payment procedures in Cameroon. It examines manual and electronic procedures in sections one and two. It also studies the benefits and problems of online filing and payments systems in Cameroon. Finally, in chapter four, Cameroon’s tax policy is analyzed following the principles of a good tax system in the first section, while the second section analyzes whether the tax policy discriminates against women and foreigners.

In the final analysis, it emerges that Cameroon has made some progress and reforms on the various components of the “paying taxes” indicator. For example, the number of hours necessary to pay taxes went from 1300 hours in 2007 to 624 hours in 2020. Also, electronic payment has been established as a compulsory mode of payment of taxes and duties for large companies falling within the portfolio of the management of large companies. On the one hand, the aim is to ease the procedures. On the other hand, it aims at fighting against corruption generally observed in the manual procedure of tax declaration and payment. Moreover, it is observed that the Cameroon tax policy does not discriminate against foreigners and women. The same tax laws bind both men and women. Private sector companies and non-governmental organizations are treated equally according to the tax policy.

However, the analysis in this report brings to light the fact that the aforementioned progress and reforms are not yet significant. The country went from the 143rd position in 2007 to the 181st position in 2020, which shows that the country’s position has rather deteriorated. This is a shred of strong evidence that taxation remains a major constraint to the development of formal business ventures in Cameroon, despite the government’s efforts in the 2021 Finance Law to reduce the tax burden on companies.

Photo by Edouard TAMBA on Unsplash.