The Politics of Fuel Pricing: How Nigeria Compares with the Rest of the World

On the 12th of May, 2016 Nigerians woke up to the detestable reality that they will now have to pay ₦145 per litre for Premium Motor Spirit (PMS), otherwise called petrol representing a 40% increase from the previous pump price, ₦86.50

While some are mobilizing for ‘#occupyNigeria season 2’, labour unions in the country are currently planning to commence an indefinite nationwide strike action that will ‘shutdown the economy’ on Wednesday in a bid to protest the increase in fuel price.

Following the harsh economic realities Nigeria is currently facing, many Nigerians have labelled the Federal Government as being insensitive to the plight of its citizen by making fuel too expensive for consumption.

But really, how expensive is fuel in Nigeria, compared to other countries? and is the Nigerian government really insensitive? We are about to find out.

As surprising as it may seem, Nigeria is ranked 12th as per cheapest price of petrol in 173 countries even with the new  ₦145 per litre price according to Globalpetrolprices.com

In Nigeria, fuel now costs ₦145/L and with the current exchange rate that is fluctuating between ₦320-₦360 to a dollar, it means we are paying  about $0.44/L

Some will argue that the countries above are not petroleum exporting countries (OPEC) like Nigeria, but what about OPEC member countries like Angola, where PMS is sold at $1/L (about ₦330), In Iraq at $0.64/L (₦211), In Venezuela pump price is $0.60/L (₦198/L) with President Nicolas Maduro calling the approximately ₦198/L pump price ‘one of the cheapest in the world’.

Even in the oil rich, United Arab Emirates (UAE) PMS is sold at $0.45/L which is about (₦148/L) which is more expensive than the price in Nigeria. 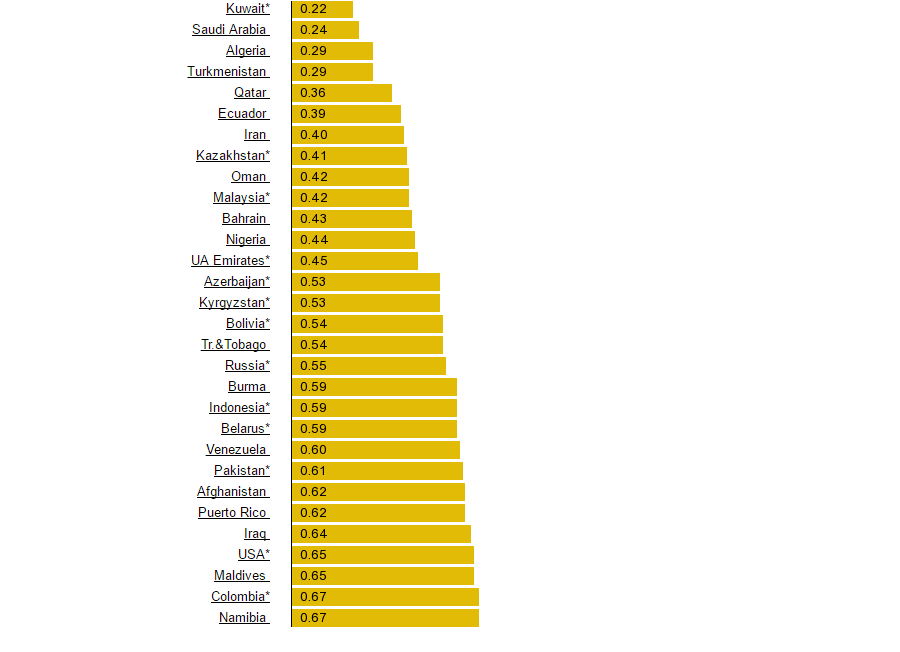 According to Globalpetrolprices.com In Hong Kong, the pump price is set at $1.85/L (about ₦610/L) making the country the most expensive seller of gasoline in the world. 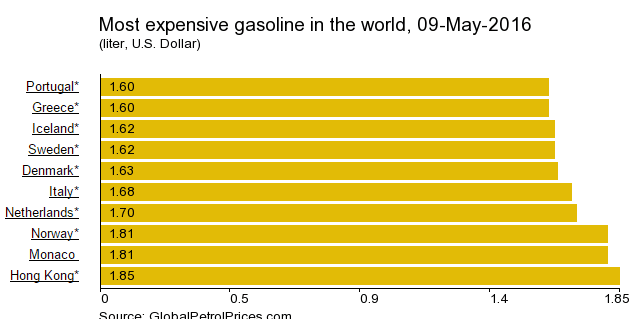 With the facts and figures above, at ₦145/L fuel is not expensive, it’s actually one of the cheapest in the world, but because of the poor living conditions of millions of Nigerians, it appears expensive and thus, many Nigerians struggle to afford it.

That is why the government needs to provide welfare programs, kill that disease called corruption, invest in electricity, education, fix refineries, provide jobs and reduce poverty in the country

Is Nigeria the only country increasing pump price?

Again, the answer is a ‘BIG NO’.The excruciating increase in pump price is not even limited to Nigeria alone, major oil rich countries of the world have increased their fuel price this year, some even by over 50%.

In December 2015, Saudi Arabia increased fuel price in the country by 40%

Like Nigeria, Saudi Arabia suffered a sharp drop in revenues as oil prices have fallen more than 60 percent since mid-2014 to below $40 a barrel.

To address the situation, the Gulf kingdom increased fuel price by 40%

President Nicolas Maduro in February increased fuel price to $0.60 (₦198) as Venezuela’s economy was pushed to the brink by the collapse in the oil price, which accounts for about 95% of the country’s export revenues.

He said the price over 50% rise was “a necessary measure, a necessary action to balance things, I take responsibility for it.”

Fuel price increased in UAE in May, 2016

As a result of the unprecedented drop in global oil prices, which has seen the price of oil per barrel decline by over 60%.

The government in Bahrain followed the steps of fellow Gulf Cooperation Council (GCC) member countries the country increased fuel price by 50% in January.

I could go on and on, to give more examples of oil rich countries like Nigeria that have increased pump price in 2016, Nigerians need to understand that this is not a Nigerian, Kachikwu, APC or PDP problem, this is a global problem we are dealing with affecting even the oil rich countries of the world.

We need to stop seeing the Federal government as insensitive, wicked, heartless, unfeeling, inconsiderate, thoughtless and hard-hearted for increasing the pump price to ₦145/L. We need to temporary sacrifice for the greater good, with the hope that as promised we will be better off in the long term.

To cushion the current challenges, the Federal Government must also sincerely provide social provisions for millions of poor Nigerians who will suffer from the fuel hike. Some of the oil rich countries listed above have increased fuel price this year, but due to the several welfare packages provided, the citizens can ease through this rough patch.

I am glad about the N500 billion social intervention programmes provided in the 2016 budget, which includes jobs, social safety allowance for the most vulnerable people, free schooling for students, soft loan to traders, investment in infrastructure etc. Hopefully Buhari’s ‘anti-corruption’ centered government can channel the funds with 100% sincerity and accountability.

For that barber down the street who relies on petrol most times to power his small generator to keep his business running, it will be difficult for him to understand how the fuel price increase will benefit him in the long run. Infact, he will most likely rant everyday about the hardship the government is causing him.

I’m sure many have wondered why a country like Nigeria, blessed with oil suffer for it? But unfortunately, Crude oil price is an internationally traded commodity , the prices are not set by the countries that produce it. Neither do oil producing countries get a discount in the international market for producing this product.

While many think the current increase in fuel price is about removal of fuel subsidy, this notion is totally wrong because it was brought about by the non-availability of foreign exchange to import petroleum products. infact, there is no provision for subsidy in the 2016 budget according to the Vice President, Yemi Osinbajo.

Oil is selling at below 40 dollars and the currency (dollar) needed to purchase the refined petrol is no longer available, that is just simply the problem here.

Oil and gas make up more than 90 percent of exports in Nigeria, providing the critical source of Nigeria’s foreign exchange.

It’s that simple; a collapse in oil prices could lead to the same in Nigeria’s foreign exchange which is crucial to support consumption of imports. Foreign exchange rates also influence capital flows- investment funds that move into and out of a country. If oil prices continue to drop it would have an adverse effect on the country’s currency value, making it less attractive to foreign investors.

Since our local consumption of fuel is almost entirely imported. The NNPC exchanges crude from its joint venture share to provide about 50% of local fuel consumption. The remaining 50% is imported by major and independent marketers.

However marketers have drastically reduced their importation for several months due to a scarcity of FOREX, thus the need for them to source independent of CBN to be able to meet the nation’s demand arose.

Now any Nigerian entity is free to import the product, subject to existing quality specifications and other guidelines issued by Regulatory Agencies.

All oil marketers will be allowed to import PMS on the basis of FOREX procured from secondary sources.

It is expected that this new policy will lead to improved supply and competition and eventually drive down pump prices.

In addition, this will also lead to increased product availability and encourage investments in refineries and other parts of the downstream sector.

This took fuel price from ₦65 to ₦141 at filling stations. This led to massive protests by civil-rights groups, labour unions, and Nigerians generally. APC, the opposition party at that time, took political advantage of the situation by identifying with the suffering and criticizing the Jonathan administration for removing subsidy.

Four years later President Buhari officially removes fuel subsidy. Millions of Nigerians are angry. Nigerians are understandably accusing the present administration of cowardice, deception, and hypocrisy, but how true is this?

And foreign reserves? Nigeria’s foreign reserves stood at $35billion in January 2012 and $29.61billion as at 28 May 2015, the eve of hand over to President Buhari. Today, foreign reserve is $27.1 billion, amid myriad of restrictive measures to stem the steady slide in the economy’s external sector.

Under the previous administration, Nigeria was enjoying an economic-growth rate of 6% averagely. Thanks to Foreign Direct Investment (FDI) riding on the back of a devalued Naira. President Jonathan also, largely, had the right economic mix. But corruption and terrorism were two of its greatest challenges. There were allegations of massive corruption, particularly what was reported to be a fuel-subsidy scam right under Goodluck Jonathan’s nose.

Rather than tackle these allegations by investigating and prosecuting those involved in the scam, President Jonathan decided to remove subsidy as the solution to the problem. The administration claimed removing fuel subsidy would free up funds for capital projects. But Nigerians had little or no trust in the administration. The administration was incompetent and corrupt. How can it be trusted to save for the future? This was a fundamental issue. So ‪#‎OccupyNigeria shot down Nigeria’s economy in January 2012, not simply because Goodluck Jonathan increased fuel price but mainly because millions of Nigerians did not trust the administration with the money it claimed it would “save” for the future.

Today there are strong reasons to believe that if fuel-subsidy removal had been allowed in 2012, most of it would have ended up in private bank accounts.

Under Buhari administration, though partly due to some of its own reactive and over-restrictive economic policies, the Nigerian economy is sick. There is scarcity of foreign exchange. Oil marketers are finding it extremely difficult to import petroleum products into the country. FDI has nose-dived. The low international-oil price meant there was no need for it.

Now that fuel price has increased internationally, we expected the government to subsidize to alleviate people’s suffering. The Buhari administration says ‘No. We don’t have enough foreign exchange to do so.” Oil marketers are having difficulties opening letters of credit to import petroleum products. The result is that NNPC alone has had to supply over 90% of petroleum products since October 2015. This has not always been so.

NNPC used to supply 48% of petroleum products. Since NNPC does not have what it takes to supply so much, there will continue to be fuel scarcity. To tackle the scarcity problem, the government painfully decides to free up the oil-supply system by allowing the international-oil price determine fuel price locally without any fiscal intervention. Oil marketers are now accessing foreign exchange (through secondary sources) to import petroleum products into the country since ₦145 naira per litre provides some reasonable profit margin after supply costs.

Meanwhile, the government is taking measures to block leakages through zero budgeting, Single Treasury Account (TSA), and its Anti-Corruption Agenda. We are now talking about refineries, public and private-owned refineries that will eventually make fuel scarcity a thing of the past.

Nigerians asked Jonathan to work on old refineries and build new ones, given the resources available at the time, and first kill the regime of fuel importation. Subsidy would have died a natural death and the process of privatization would have been smoother. Today, some of the refineries are functional again, which were not in Jonathan’s days. Government-owned outlets sell refined fuel today, at a far cheaper rate. Not the private ones.

As labour go all out on Wednesday to attempt to shutdown Nigeria, my prediction is that they will not even achieve up to 5% of what the 2012 #OccupyNigeria protests achieved, the protest is bound to be a massive failure, because more Nigerians trust the sincerity of Buhari’s government unlike his predecessor. And while the ₦145/L price remains a hard pill to swallow, it’s still the 12th cheapest price in the world, facts only.

Daramola Babalola is a political analyst and News Editor