Making a case for Nigeria women farmers – By Joel Adeniyi 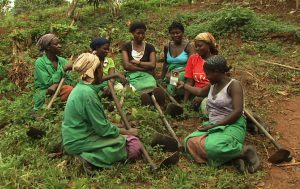 The role of women in agricultural production can never be overemphasised. Various researches conducted on the contribution of women to agricultural development in Nigeria (Amali, 1988; Auta et al., 2000) suggest that women’s contribution to the farm work is as high as between 60 and 80 per cent of the total farm task performed.

Despite the important role women play in agricultural production in the country, they are hardly given any attention by the government. Banks hardly grant them loans and they are hardly reached with improved seeds, fertilizer and other inputs (Saito and Spurling, 1992). Also, the women farmers have either no or minimal part in the decision-making process regarding agricultural development in the country.

Gender inequality is still dominant in the agricultural sector and this constitutes an obstacle to development, calling for a review of government policies on agriculture to all the elements that place rural women farmers at a disadvantage.

“When women are empowered and can claim their rights and access to land, leadership, opportunities and choices, economies grow, food security is enhanced and prospects are improved for current and future generations.”

The Sustainable Development Goals (SDGs) that can be likened to be in favour of the agricultural sector include Goal 1 and 2, which are to bring down poverty and hunger. Therefore, to make these SDGs a reality, every measure must be put in place to achieve them. The agricultural sector plays a strategic role in the economic development of every country.

It has already made significant contribution to economic development and growth of the advanced countries. It has also played a significant role in the economic prosperity of less developed countries. Agriculture helps to bring economic development in the following areas: By providing raw materials to the industrial sectors, by providing food to the people, providing shelter and much more. It has also been discovered that agriculture will help increase youth employment.

But still, women are the major factor that practice agriculture and they are not included in the decision-making in the agricultural sector. This is mainly reason why most of agricultural policy of the country both at federal level and state level are not gender friendly.

Organisations are now coming up to encourage gender equality in the decision and policy making of the state and these organisations include ONE, which is a campaigning and advocacy group of more than nine million members worldwide.

ONE takes actions to end extreme poverty and preventable diseases, particularly in Africa. It believes that the fight against poverty isn’t about charity, but about justice and creating market opportunities for both genders. It’s high time our government knew that, by making life better for the masses is not charity but a responsibility to the citizens of the country they are representing in the public offices.

To improve the agricultural sector of the economy, justice and equality has to be involved in the decision and policy making process. For women to cover the larger percentage of the gender involved in agricultural production, they also deserve to have voice, recognition and support.

For extreme poverty to be eradicated in the country, agricultural sector needs to be revived by ensuring that justice and equality play a major role in making policies and providing support for farmers.

Joel Adeniyi is a ONE champion in Nigeria