The British Prime Minister, Theresa May, and the German Chancellor, Angela Merkel, earlier this week, toured six countries in Africa to strengthen bilateral agreements and sign new trade deals. In what many analysts described as a rush for African markets by the Europeans, the visit came on the heel of the move by the United Kingdom (UK) and European Union (EU) to create new market and investment frontiers as the Brexit deadline draws close. 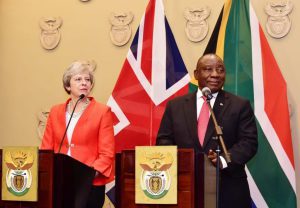 The visit’s flagship announcement was the promise of £4 billion ($5.184 billion) in support for African economies, as well as a pledge for Britain to become one of Africa’s most significant investors by 2022.

Accompanied by a multi-sector business delegation, comprising 29 UK investors, May met the South Africa President Cyril Ramaphosa, to discuss a “renewed partnership”, delivering a keynote address at an investment summit in Cape Town.

He said: “We have noted with great satisfaction the strong relationship between South Africa and the United Kingdom in wide-ranging areas of cooperation.”

On her part, Ms May said she was looking forward to discussing how Britain could strengthen partnership with African countries to deliver important investment and jobs, as well as continue to work together to maintain stability and security.

The agreement on Defence was signed by Nigeria’s National Security Adviser, Babagana Monguno, and the British Deputy National Security Adviser, Christian Turner, while the agreement on Trade Development was signed by Nigeria’s Minister of State Budget and National Planning, Hajia Zainab Ahmed, and the UK’s Minister of State for Trade Policy, George Hollingbery.

Kenya secured a deal to export agricultural products to Britain after the UK leaves the European Union, the visiting British PM revealed on the third stop of her African trip. 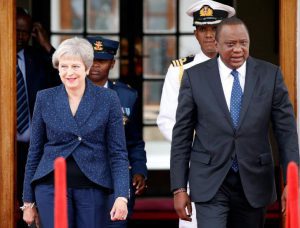 She said she wanted the Britain to become the biggest investor on the continent out of the world’s richest nations.

“As Britain prepares to leave the European Union we are committed to a smooth transition that ensures continuity in our trading relationship with Kenya, ensuring Kenya retains its duty free quota access to the UK market,” Ms May said.

The duty free exports will benefit flower, tea, vegetable, and coffee farmers, as well as investors in agriculture sector.

President Uhuru Kenyatta, speaking alongside Ms May at a news conference, said he welcomed her assurance that Kenyan duty free exports would continue after Brexit, adding that Kenya will be pressing for an increase in exports.

British companies are also keen on promoting trade opportunities outside the EU after Brexit.

“Kenya is looking forward to doing business with UK businesses that will enhance economic benefits for the two countries,” said President Uhuru.

Kenya imported goods worth $298 million from the UK and exported products worth $300 million to the country.

Mrs Merkel visited West African countries of Senegal, Ghana and Nigeria with a focus on strengthening economic development and curtailing illegal migration, in her three-day trip. 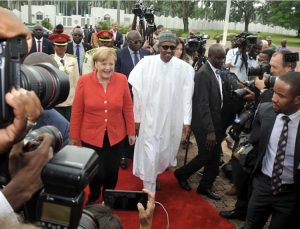 The German Chancellor said she would be focusing on boosting small businesses in the three African countries.

She touched on boosting Nigeria’s power generation capacity, saying: “There is one project that hasn’t been finished yet, it is about the sugar plant, where we are trying to be able to switch energy production from electric supplies to bio-waste. We could open up new sources; we have entrepreneurs in our delegations that can make offers in the field of wind energy. What is important for us is that we have efficient in transmission systems.

“There is one company that I told the president about and we are happy that we are able to examine the context that identifies leakages in the pipelines.

“We are operating in a great number of areas with the Nigerian side especially with the field of energy. Germany is more than happy and even more than ready to work with Nigeria in this regard.”