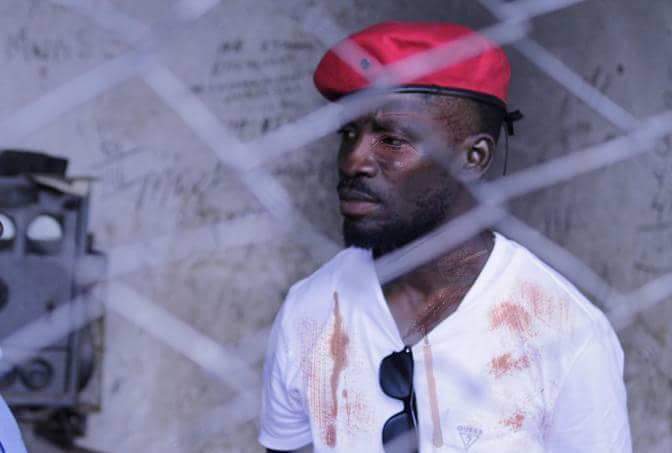 Before he was a politician, Robert Kyagulanyi Ssentamu, was a musician going by the moniker Bobi Wine. His music would hit the airwaves, getting people dancing and talking about social issues.

The 36-year-old singer has been critical of President Yoweri Museveni’s government and when he got into politics, his aim was to stand up against the excesses of the government and ensure the people’s interests are represented.

Just the other day, his driver was shot in the chaos that erupted in Arua, one of Uganda’s constituencies. The chaos erupted after people started throwing stones at President Museveni’s motorcade and Bobi Wine was arrested for his alleged role in the chaos.

The legislator was charged with unlawful possession of firearms in a military court. His lawyer, Medard Sseggona, told reporters that his client had been so “brutalized he cannot walk, he cannot stand, he can only sit with difficulty … It is hard to say whether he understands this and that.”

A number of questions have arisen over his arrest, including why he was tried in a military court when he is a civilian.

Right groups have questioned Uganda’s use of torture on Bobi Wine, and have asked for the government to produce the musician/legislator within 48 hours. The family held a press conference asking to see Bobi Wine.

“We as a family of Bobi Wine, we do not know where he is at the moment but all I can say is that we are demanding for him, alive in the next 48 hours. Whether what he did that led to his detention is right or wrong… we want to see him because he has a right to be seen by his family, wife and children,” Bobi Wine’s brother Eddie Yawe said.

Supporters took to the street to protest his arrest but were dispersed. Supporters from other African countries took to their social media to call for the release of the legislator under the #freebobiwine hashtag.

After close to two weeks of tensions in Uganda, a court in the northern town of Gulu granted the opposition legislator and three other lawmakers a bail.

Kyagulanyi was seen in the courtroom moving with difficulty using crutches. His lawyer, Sseggona, said he had been “brutalised” in detention.

Music of resistance
Kyagulanyi was born in Mpigi district, central Uganda, but came of age in Kamwookya, one of the poorest suburbs of Kampala. It is here that he launched his music career in the early 2000s after he graduated from Uganda’s oldest university – Makerere University – with a degree in music, dance and drama. He came to be famously known as the “Ghetto President” for persistently speaking out about the struggles of the lower classes and the urban poor in Uganda. 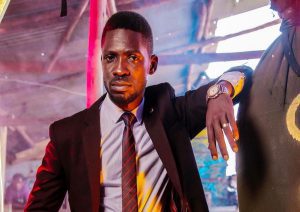 Bobi Wine… as a musician

His lyrical genius and courage to drop songs that hit directly at government failures and excesses made him spectacularly popular among Ugandan youth. He insisted that Ugandans had many questions but few answers from the corrupt political leaders.

His outspokenness and growing popularity made him a target of government censorship, particularly after President Museveni, who has been in power since 1986, started feeling the demographic shift in the country’s electorate.

For a decade he had relied on the rural vote and older people who still suffered from the collective trauma of having survived the atrocities of past Ugandan regimes. These segments of Ugandan society are risk-averse and aren’t ready to rock the boat rowed by the man who gave them some feeling of safety even as war raged on in most of northern Uganda up until 2008.

Although Bobi Wine has always been political in his lyrics, it wasn’t until 2016 that he made his first step into politics. That year, the presidential elections were yet another contest between President Museveni and his longest-running political rival Dr Kizza Besigye.

It was that year that Museveni decided it was time to reach out to the young and increasingly desperate generation. To do that, he paid Uganda’s leading artists to compose a song praising his efforts and to campaign for him, a move that infuriated many young people, who retaliated by boycotting their music until some of the musicians apologised. It was then that Bobi Wine’s star shone brightly on the Ugandan political scene: he rejected the president’s offer to join his campaign and was quite vocal about his decision.

As other musicians sang Tubonga Naawe (We are with you) for Museveni, praising his great deeds, Kyagulanyi released Dembe (Peace), attacking the president’s greed for power directly and condemning political violence.

“Why would you wash white clothes only to hang them on a dirty log to dry?” sang Bobi Wine in reference to what Museveni was doing to the little he had achieved by clinging onto power. “Why don’t you look up to Mandela as an example? He ran for one term and released the flag” goes another line of the song.

Another track released in 2016, Situka (Rise up), which his supporters sang during protests against his detention, called on young people to rise up and march together against oppression. “When the going gets tough, the tough must get going, especially when leaders become misleaders, and mentors become tormentors, when freedom of expression becomes the target of suppression, opposition becomes our position,” goes the opening line of the track.

In 2017, when a court nullified an earlier parliamentary election in Kyaddondo East, a constituency on the outskirts of Kampala, Kyagulanyi seized the opportunity. He won the seat in a landslide victory despite Museveni all but camping in the area during the campaign period.

Bringing ‘the ghetto’ to the parliament
After he was sworn in as an MP, Kyagulanyi did not stop being Bobi Wine. He told reporters that if the parliament won’t go to the ghetto, the ghetto will go to the parliament. He then embarked on several concerts across the country, prompting Uganda’s highly partisan police to ban some of his scheduled performances in October 2017.

At the height of debates on the constitutional amendment that would later remove the age limit for the president, allowing Museveni to run for yet another re-election, Bobi Wine released Freedom . 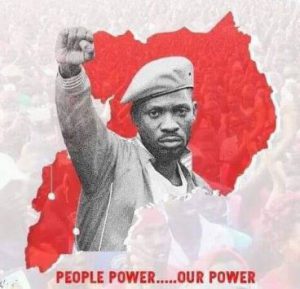 “We know you fought a Bush war, but imagine a child who was unborn when you came has long become a parent… They request that you don’t touch their constitution because it’s their only remaining hope,” Bobi Wine sang.

Together with the opposition Democratic Party, he led the “Togikwatako” (Do not touch) movement which protested the changing of the last clause in the constitution that stood in the way of 74-year-old Museveni holding onto power for life.

During one of the parliamentary debates, the army stormed parliament and several MPs were assaulted. This was a clear signal that President Museveni had grown impatient about dealing with any opposition.

In July this year, Bobi Wine was also instrumental in rallying young people to protest a new social media tax which the president presented as being intended to deter “gossip”, but which was actually a desperate measure trying to curb escalating anti-Museveni sentiment among the young generation.

Why is Bobi Wine a threat to Museveni’s power?
Bobi Wine’s magnetic pull on the electoral scene, which has helped the opposition in key by-elections, has increased paranoia within the ruling party. The realisation that the ground is slowly shifting under their feet has sent those in power into a panic.

These few electoral victories are a sign of what awaits President Museveni if he tries to run again in a country where around 65 percent of the population was born after he took power. His previous tactics of paying off voters and using the trauma of the past to coax people into voting for him are no longer working. And his attempt to talk to the young generation has ended in complete failure.

Young people have responded with contempt to Museveni calling them his “bazzukulu” (grandchildren); their aspirations largely do not include him ruling Uganda past his 77th birthday.

Young Ugandans face high unemployment rates and a lack of economic opportunities. What was once touted as Museveni’s greatest achievement – security – has been put to a great test the last two years. Crime has increased, with around 43 women targeted, kidnapped, raped and murdered within Kampala and the surrounding areas in the last 18 months.

Trying desperately to cover up the fact that his popularity is rapidly declining, the president has blamed the recent electoral setbacks on the Electoral Commission, which he has accused of being “full of rotten people”. This is a president grappling with defeat and fearing he could lose the next presidential vote.

Nothing about the arrest, torture and charges against Bobi Wine is new. Museveni has handled his main opponents and their supporters in the same way in the past. What is new is the ability of young people to organise, speak up and mobilise on and offline, galvanised by a young voice who is just like them – Bobi Wine.

His is the story of an outsider who brought his own folding chair to a table no one expected him to be at. Whether he will continue with the same gusto after his release and medical treatment remains to be seen. What Kyagulanyi has given young Ugandans is an idea and a hope for a post-Museveni future that the president cannot just wish away.

However, it will take a lot more effort on part of the opposition – beyond Bobi Wine and a growing cult-like following – to bring down Museveni’s rule.