How Lust for Power is Fueling Armed Conflict in South Sudan 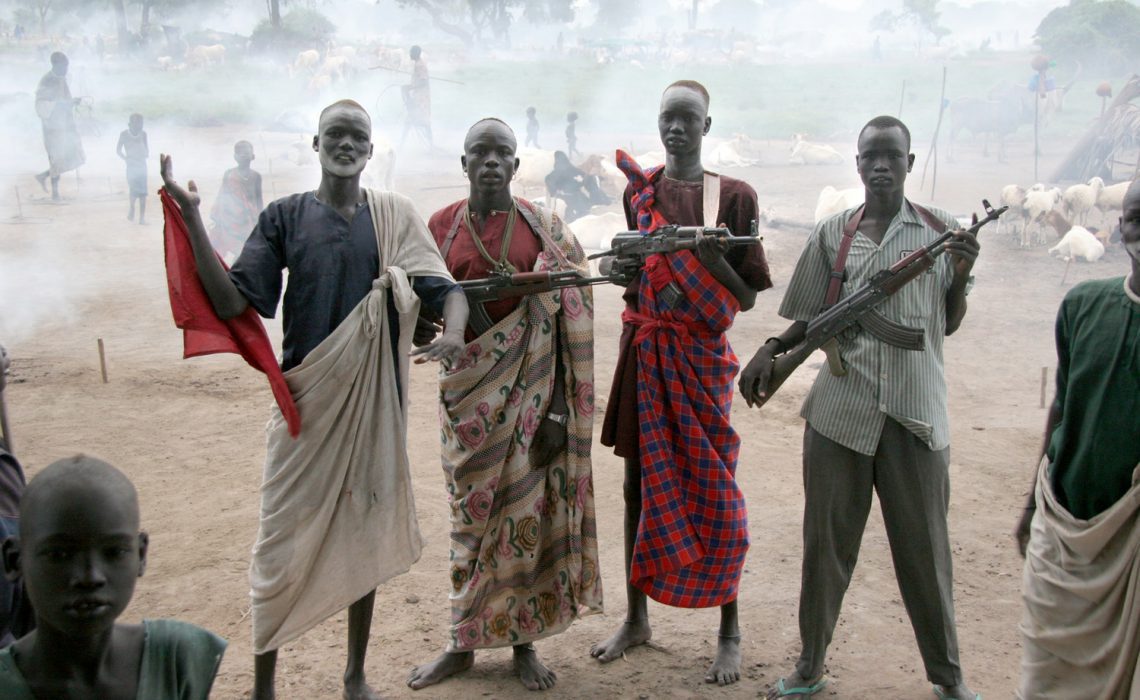 President Salva Kiir of South Sudan and rebel leader Riek Machar signed a preliminary power-sharing agreement on August 5, 2018. The deal, which returned Machar to his position as the First Vice-President, was the latest of multiple ceasefire and peace agreements in the country.The August 5 deal made significant steps from the recent Khartoum Declaration. It gave the vice-presidency to nominees of the transitional government, the opposition alliance, and former political detainees.

It also created a framework for the new transitional government, which includes processes for choosing ministers and sets requirements for the participation of women and rebel groups. It also established an Independent Boundaries Commission (IBC) to delineate South Sudanese states and avoid government-led state border revisions that created conflict in the past. However, it does not develop a peacekeeping mechanism for preventing violence during transitional periods. In fact, it relies explicitly on the 2015 Agreement on the Resolution of the Conflict in the Republic of South Sudan (ARCSS), which has proven unsuccessful.

The August 5 agreement was admittedly not final. It followed from the Khartoum Declaration of June 27 in Khartoum, Sudan and built on the preliminary power-sharing agreement signed on July 25. Machar and Kiir signed a new, comprehensive deal on September 12.

Both sides’ exhaustion on the ground and increased pressure from sanctions and regional partners may prevent another outbreak of violence, as seen in the wake of the Khartoum Declaration. That ceasefire was set to begin within 72 hours of the signing, but it failed almost immediately. The Sudanese People’s Liberation Army–In Opposition (SPLA-IO) claimed that government forces broke the ceasefire, while the government claimed that rebels attacked first.

In response, the Intergovernmental Authority on Development (IGAD)—an eight-country regional trading bloc that includes Sudan, South Sudan, Uganda, Ethiopia, and other neighboring countries—delayed sanctions for violators of the Cessation of Hostilities (COH) agreement in order to give the parties more time to comply.

International pressure increased following the U.N. Security Council’s embargo on the sale of arms to South Sudan, passed on July 13. The Security Council, with strong pressure from the United States, passed a draft resolution threatening such an embargo on May 31, 2018. The U.S. banned the export of weapons and other defense services to South Sudan in February 2018, but Ugandan President Yoweri Museveni has stated opposition to an arms embargo. Critics of Ugandan interference in South Sudan allege that weapons flow through Uganda into the country.

“I think the problem with an arms embargo is, first of all, whether you will be able to generate the consensus behind it. Unfortunately, it has been next to impossible to do so, partly because the geopolitical dimension is so dominant, the nations will never support it for whatever reason,” said Dr. Ibrahim Wani, former head of the Human Rights Division of the U.N. Mission in South Sudan (UNMISS).

The power-sharing deal comes after years of sporadic negotiations to end the five-year civil war, which has taken over 50,000 lives and displaced more than two million people. With more than 15,000 U.N. peacekeepers and a growing fear of terrorist activity in East Africa and the Sahel, peace in the world’s youngest country has vested interest from beyond its own borders. The conflict and its humanitarian threat have crossed the border into Uganda, which sent its own troops into South Sudan in 2014. Uganda has taken in over one million South Sudanese refugees to date.

“You have a total breakdown in command and control, no mechanism of accountability,” said Dr. Wani. These sentiments reflect the harsh reality of the human rights situation on the ground. UNMISS documented “…114 cases where the SPLA and allied militias arbitrarily killed civilians perceived to be supporters of the SPLM/A in Opposition…” in just the town of Yei between July 2016 and January 2017. Nation-wide abuses come from all sides of the conflict, and they include widespread and regular sexual violence.

The proliferation of rebel groups complicated what began as a political dispute between President Kiir and Vice-President Machar.

Riek Machar’s signature on the Khartoum Declaration and the later “Agreement on Outstanding Issues of Governance” moved reconciliation forward despite continued ceasefire violations. The first clause of the Khartoum Declaration reversed government and rebel positions on the presence of foreign troops. It invited IGAD and the African Union (A.U.) “…to deploy the necessary forces to supervise the agreed permanent ceasefire.” The power-sharing agreement’s focus on governance addressed issues of state creation and border delineation that contributed to conflict after past agreements. However, it does not address the failures of Kiir and Machar.

“I really don’t understand why we keep going back to the same people, maybe because nobody has come up as a leader who can genuinely lead an objective process of these negotiations. What we are doing is relying on the same combatants… I think a peace process that is focused entirely on this issue of distribution of spoils, of power sharing is, in my view, defective,” Dr. Wani said following the signature of the Khartoum Declaration.

Rebel forces outside of the SPLA-IO also signed the Khartoum Declaration and the power-sharing agreement through representatives from the South Sudan Opposition Alliance (SSOA), an umbrella organization of 9 opposition groups. The SSOA formed in February 2018 in order to ease the peace process, and its participation in the agreements is key to the stability of peace in South Sudan.

The proliferation of rebel groups complicated what began as a political dispute between President Kiir and Vice-President Machar. Dr. Nureldin Satti, former Deputy Special Representative of the U.N. to Burundi, said all rebel groups must be a part of the peace arrangement for a stable situation to take hold. Kiir granted amnesty to members of rebel groups on August 9, lowering the barrier for their peaceful reintroduction to civic life, though the transition will not be easy.

Satti said that “In a peace process you have to start from the most obvious beginning. The most obvious beginning was that you have a president and a former vice-president who are perceived as having powerful constituencies in the country, groups who are more vocal and more approachable. But you have to have in mind the other groups, those who are outside the process, and how to bring them into the process. This should be a phase which is immediately linked to the current one; you should not wait too long.”

Representatives of former high-level political detainees and smaller political parties were also signatoriesto the Declaration. Former detainees’ participation in the peace talks furthered efforts by the ruling SPLM to reunify the party, which fractured at the beginning of the war in 2013.

“The talks will happen, but whether they will yield anything meaningful is the big question… based on past experience I don’t think there is any reason they will. We have the same sets of actors, conditions have not changed on the ground, in fact, I think they have worsened,” Dr. Wani said on July 3.

Implications for the Horn of Africa

Meanwhile, strong regional interests continued to shape the direction of negotiations. Increased involvement from the new Ethiopian Prime Minister, Abiy Ahmed, helped focus regional efforts that fell short in the past. Prime Minister Ahmed, whose position as chair of IGAD puts him near the center of negotiations, convened the first set of summer face-to-face talks between Kiir and Machar in Addis Ababa, while President Kiir’s presence in Khartoum is, according to Dr. Satti, a “…new development in the history of the settlement process.”

The Addis Ababa meeting was the first face-to-face talk between Kiir and Machar since the failed 2016 negotiations, and the September 12 agreement was signed in Addis.

Regional interests center on South Sudan’s vast oil wealth, a major issue in the Sudanese civil war that eventually led to South Sudan’s independence. The fifth and last point of the Khartoum Declaration stated that the South Sudan government will work toward the security of the oil fields in the Unity State “…in collaboration and coordination with the Government of Sudan,” and that the two governments will “…immediately rehabilitate the oil fields identified [in Unity State].”

Closer security collaboration between the two nations could ease economic strains on South Sudan, as it attempts to bring oil production back to previous levels. The civilian population faces a fuel shortage that has raised black market prices, preventing the completion of daily economic activities. However, increased oil production may not improve the lives of civilians, as critics have accused the South Sudanese government of using oil money to pay militias.

South Sudan will require massive investment to recover economically from the war, but the human cost can never be repaid. Humanitarian institutions and programs are necessary for the success of the final peace deal. South Sudan would do well to create institutions that provide medical care, including psychological care, throughout the country, and this could be achieved through the support of regional and international bodies.

The actors involved in the initial conflict remain in power; mechanisms for accountability could help rebuild citizen’s trust in the government. The government of South Sudan should consider creating frameworks during the election process to support this. Governance agreements alone do not have the potential to repair communities and rebuild trust on the ground, nor do they have the power to immediately legitimize a long broken government.

“What we need to ask ourselves is how much resolve we have behind this work on the issue of protection of civilians… because our experience of what is happening to civilians is so inhumane that the international community cannot sit by,” Dr. Wani said. “But are we really prepared to do what it takes?”

Alec Woodard is a former intern at the Woodrow Wilson International Center for Scholars where this piece first appeared. He is currently an Account Manager at Deliver Strategies.