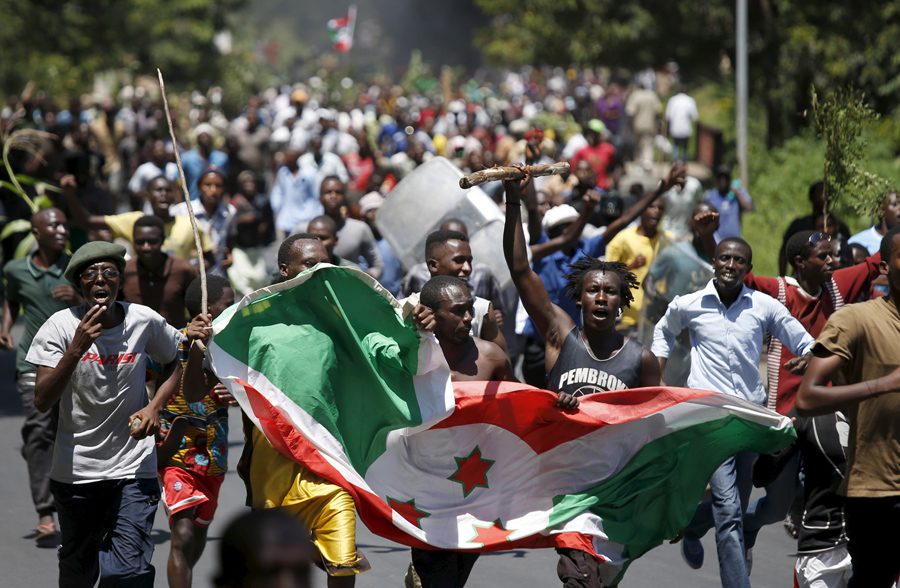 About 30 international non-governmental organizations (NGOs) shut down their services in the East African state of Burundi in January, yet another sign of the deepening political crisis that began in 2015 and which has allowed the current president, Pierre Nkurunziza, to further isolate international agencies who have been critical of his actions. And as the NGOs leave, and the investment dries up, things are likely to get worse.

The troubles began when Nkurunziza (who has been in power since 2005) sought a third, five-year term in office, in 2015—a move that was viewed by commentators and political opponents as a power grab by him and his party, the National Council for the Defense of Democracy—Forces for the Defense of Democracy (CNDD-FDD). Nkurunziza won the subsequent election, but there were violent clashes—and a failed coup.

Then, in May 2018, a referendum was held on whether the presidential term of office could be extended, essentially meaning Nkurunziza could remain in power into the 2030s. The run-up was marred by violence, but following a “yes” vote, the crisis was somewhat defused when Nkurunziza announced he would step down when his current term ends in 2020.

Despite the brief period of optimism that followed the president’s announcement, fears are once again growing about next year’s election. As one woman in Makamba explained to me:

There is less violence now, and the referendum passed peacefully, but we doubt that this will be the case in the future, things will be more difficult.

Many of the difficulties Burundians face stem from deepening ethnic divisions as the president, a Hutu, exerts control over power-sharing institutions that have managed the Hutu/Tutsi divide since the end of the civil war in 2005. This has been exacerbated by the failure of successive attempts to find a way through the political crisis and a smooth path to the 2020 elections. Many Burundians only expect Nkurnziza’s ethnically-charged rhetoric to get more inflammatory during election season. As one man from Romonge told me:

The signs of violence are occurring. We see the verbal attacks starting to spread around. Another cue is around election or big political moments. People will then fall back into identifying themselves into Hutus and Tutsis and start separating.

The CNDD-FDD aligned security forces and the party’s youth wing, the Imbonerakure, also continue to harass and repress any opposition. As a young man in Nyanza Lac said:

There is no freedom, no liberty, no freedom of expression. People are being imprisoned for their opinions. I have been put in prison and tortured. I now cannot return to my village. I cannot leave. The youth groups backing the government in my home village will report on me and I will go back to prison. I doubt I would even survive.

Indeed, the United Nations reported 564 extrajudicial killings from April 2015 to August 2016 alone, and few expect the situation to improve. One church official in Makamba told me: “There is a lot of fear over the upcoming election … and double the amount of efforts are needed to be made in these circumstances to cancel the dangers.” 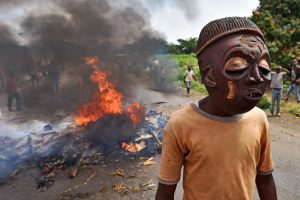 A protestor opposed to the Burundian President’s third term wears a mask near a burning barricade in the Kinama neighborhood of Bujumbura on May 25, 2015. AFP PHOTO/Carl de Souza

Burundi is on a particularly perilous track. As the various parties have failed to agree on a road map for the 2020 elections, international actors are concerned that the power-sharing institutions, which were established by the Arusha Accords and moved the country out of a bloody conflict that lasted from 1993 until 2005, will collapse altogether. As the British political coordinator of the mission to Burundi recently stated at a security council briefing:

The government of Burundi must ensure that the spirit of the Arusha Accords is respected when any constitutional reform is implemented. The current crisis in Burundi can only be resolved by continuing an inclusive dialogue that preserves the Accords.

But the parlous state of the economy is another concern and could lead to wholesale political collapse as more and more Burundians are left without vital services, potentially leading to inter-ethnic rivalry over the dwindling resources.

The economic downturn, in no small part due to the European Union’s (EU) 2016 decision to withdraw development funds to Burundi due to government repression, is putting at risk those bridges that have been built between communities. As 2020 approaches, more international support is needed.

As a villager in Rumonge explained to me: “There are further political challenges ahead, so the peacebuilding work needs to be supported as 2020 comes up.”

In this crucial period before the 2020 elections, the international community needs to strengthen its support for the long-term stability of Burundi by continuing to pressure the current government over its lack of dialogue with and continued repression of the political opposition.

Otherwise, the power-sharing structures that have helped stabilize Burundi after decades of conflict will collapse and the violence that does occur will be worsened by the dire economic conditions and the failure of the international community to provide the needed humanitarian aid to help the most vulnerable.

After all, as the Burundian proverb goes: “A hungry person is an angry person.”

Drew Mikhael is a Research Fellow in the School of History, Anthropology, Philosophy and Politics at Queen’s University Belfast. This article first appeared in The Conversation.

Policy and Research
Why is Burundi the ‘Poorest’ Country in the World?
Opinion
Will History be Harsh to Burundi’s Pierre Nkurunziza?
Business and Trade, Economics, Issues
Burundi must embrace this private innovation