Why Nigeria Cannot Afford to Elect Atiku Abubakar as President 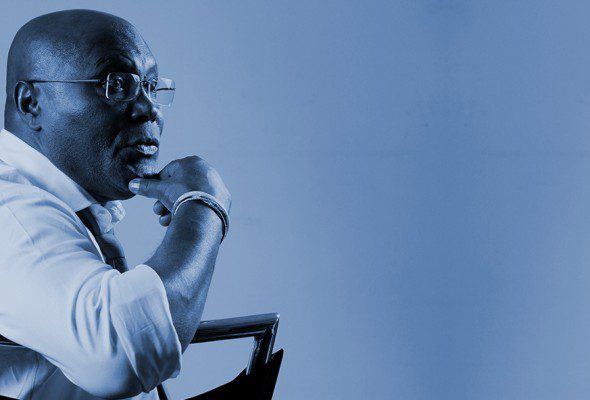 Yesterday, Atiku Abubakar posted a picture of himself having a phone conversation with US Secretary of State, Mike Pompeo in what appears to be a ‘shut-up’ response to claims by the ruling APC that he is under US sanctions.

But recently, the damning opinion of former President, Olusegun Obasanjo on Atiku Abubakar made in his infamous book, My Watch, back in 2014, is making the news again as it points to a bad candidate.

Atiku served as Vice President under Obasanjo and rather than have positive words for his lieutenant, Obasanjo believes Atiku is “not trustworthy,” although, he recently endorsed his candidacy.

In the book,  Obasanjo noted:

What I did not know, which came out glaringly later, was his parental background which was somewhat shadowy, his propensity to corruption, his tendency to disloyalty, his inability to say and stick to the truth all the time, a propensity for poor judgement, his belief and reliance on marabouts, his lack of transparency, his trust in money to buy his way out on all issues and his readiness to sacrifice morality, integrity, propriety, truth and national interest for self and selfish interest.

Atiku is Only one of Many Bad Eggs in Nigerian Politics

The former President’s words might be a bad reference for Atiku, however, Atiku is only one among many bad leaders the country have had since 1999—Obasanjo inclusive.

Most of them only enjoyed the title of ‘President’ without embracing the full responsibility that comes with it. Atiku Abubakar is among the cabal that has been in power for far too long without ushering the country’s overdue prosperity.

They are driven by lust for power and not patriotism and he will only extend this list if he is elected president.

He is alleged to be involved in an international syndicate of money laundering, looting, and corruption, which many still believe earned him a ban by the US Department of Homeland Security.

Why a Shady and Secretive Visit to the US?

Although, he was granted a visa late last year and briefly traveled to Washington D.C., the status of the investigation is still unknown.

In 2010, the US Senate Permanent Sub-Committee on Investigation released a detailed report of how Atiku wired $40 million from offshore companies to US accounts allegedly controlled by him and his wife, Jennifer Douglas.

It was the primary reason he was banned from entering the US, or perhaps, personally avoided traveling to the country to avoid a possible arrest by the FBI.

Considering the fast and secretive nature of Atiku’s visit to the US last year, perhaps he only has a temporary waiver and not a dismissal of allegations. 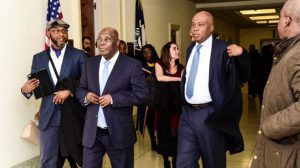 Atiku and the Senate President recently made a short and secretive visit to Washington D.C.

The Many Corruption Allegations on Atiku Back Home

During the privatization process under Obasanjo, Atiku was the Chairman of the National Council on Privatization (NCP). He allegedly influenced the sales of government enterprises to his friends—he recently callously said he’ll enrich his cronies, again.

Of course, there is nothing wrong in privatization since it increases efficiency and profits, however, Atiku’s selfish interests and bad decisions did not allow for an efficient liberalization process.

Atiku was also implicated in the Halliburton scandal that led to the imprisonment of American congressman, William Jefferson.

He also allegedly used state funds to build a private University—the American University of Nigeria in his native Adamawa—when most public universities were collapsing.

Atiku was only a public servant and his salary could not have built the university or started any of the companies in his name—even adding his personal assets.

Nigerians must be vigilant and strict on who they elect to lead them. Corruption destroys a nation and breeds inequality.

Nigeria is already miles behind because of the consequence of endemic corruption. This must not be condoned anymore, and it must start by not electing corrupt individuals.

Continue reading this series:
Now that Elections are Postponed, Can we Talk about this Ugly Giant Broom?