Now that Elections are Postponed, Can we Talk about this Ugly Giant Broom? 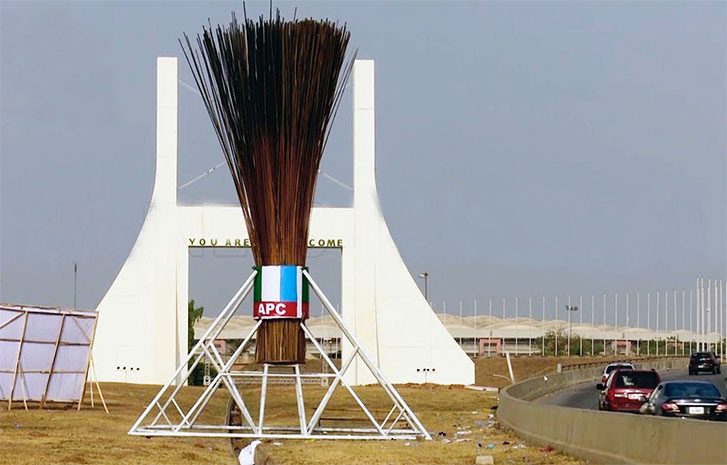 The embarrassing postponement of Nigeria’s elections might have come as a shock to many in light of the billions of dollars the country is expected to lose in the coming days. What is perhaps the most shocking embarrassment, happened a few days before the now infamous February 16 postponement: the giant broom made of metal erected by the ruling All Progressives Congress (APC) at the entrance of the nation’s capital, Abuja.

Is it a state-funded construction? If so, how much resources went into it? And who authorized the construction at such a revered location?

Before anyone blames the Independent National Electoral Commission (INEC) any further for incompetence in the presence of abundant resources, for postponing the elections, they should do similar to the APC.

The broom is a summary of the endemic attitude of wastefulness and misplaced priority among the country’s leadership. Why on earth will the APC spend so much to deface the main entrance to the country’s political capital with an ugly campaign structure?

At a time when the Nigerian military is sacrificing so much for the country, why can’t the APC government honor the memory of the fallen heroes by erecting a statue at the city entrance instead? Why a campaign broom?

The APC should not have erected a structure with no connection with our national priorities at such location. It only proves that politicians will abandon rationality to make political gains.

Moreover, the capital’s administrators would have challenged the audacity of the opposition if it had done the same. 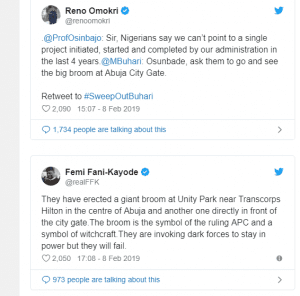 APC Distanced itself from the Irresponsibility

Although a group of APC volunteers claimed responsibility, the party leadership has distanced itself from it.

If the government did not authorize the construction, any volunteer group would have been challenged in the process of erecting such symbol. So, one might question the substance in the party’s claims.

Any foreign observer that pass through the broom will simply laugh at the ignorance of the APC. It is a bad sight for the country, not a good one.

Although the APC leadership had denied they had anything to do with the giant broom, it challenged the main opposition party, the People’s Democratic Party, to erect its own symbol, the umbrella, anywhere.

The federal and capital territory governments must be probed after the elections to see if either had funded such construction.

The Broom is Ugly and it should be pulled down Immediately

Nigerian politics is more of a joke as much as it is an embarrassment and this broom is a joke taken too far.

It is unbelievable that the same government that has made financial accountability and prudence its watchwords will be this hypocritical.

It is a slap on the seriousness millions of Nigerians have pulled into this election. It is absolutely needless.

The country’s capital is not APC’s playground where it can erect anything it wishes to promote its campaign. It belongs to all Nigerians and must be treated with the respect that will make everyone proud and not further embarrassed by the government.

Aondoyila Lewis Tanguhwar is an electronic engineering student at the University of Makurdi in Nigeria. He is a volunteer at African Students for Liberty.

Continue reading this series:
Nigerian Politicians Count on Violence to Win Elections—Just Don’t Talk about It