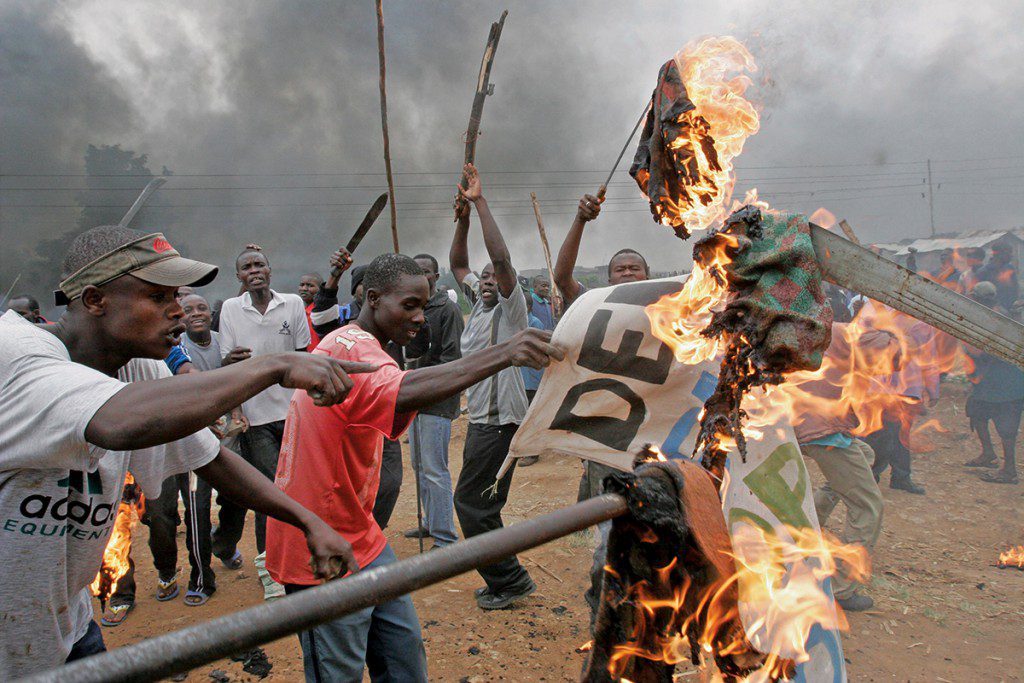 Earlier this week, Nigeria’s president, Muhamadu Buhari gave a stern warning to any individual or groups that may have plans to disrupt election proceedings in the country. He warned that such individuals will only be doing that at the expense of their lives. Buhari’s message is part of the growing call by observers to ensure everyone involved in the 2019 elections, commits to a free, fair and credit process. But it will take more than warnings and hopeful calls to make Nigeria’s electoral that is so akin to violence, change overnight.

These elections will be unlike any other before it. It will be a hot contest, and many opposition figures believe the President’s tough warning has only made the already tense atmosphere more volatile. Others say it is an attempt to plant fears in the mind of Nigerians that wish to see him leave office.

They have institutionalized electoral corruption. Politicians often conspire with electoral officials and even regular citizens to buy votes.

The Violence is already Brewing

As it is often the case with elections in Africa, Nigerian politicians, and their thugs are doing all they can to put their candidates in pole positions mostly through unethical means. Politicians have made staggering allegations against opposing figures and even staged violent attacks on one another.

Nigerians are getting used to the ugly and embarrassing ways these politicians shame themselves on national television. They also pay media outlets and media influencers to propagate fake new in print and social media. These are not what democracy needs to flourish.

One can only hope that this recklessness and irresponsibility does not burst into violence on election day.

Nigerian Politics Should not be Zero Sum

In their desperate bid to acquire power, many Nigerian politicians will give nothing to chance. And yes, it includes kidnapping and assassination; it is do-or-die. But that is not all they do.

They have institutionalized electoral corruption. Politicians will often conspire with electoral officials and even regular citizens to buy votes.

They collude with godfathers to bribe security agents and hire thugs to intimidate communities that are opposition strongholds. We saw that at the recent campaign of the ruling APC in Abuja where hoodlums vandalized properties and injured innocent civilians.

There will unlikely be a change in behavior and tactics towards election if INEC does not improve its intelligence strategy.

Although INEC still enjoys the goodwill of Nigerians due to its remarkable scorecard for the 2011 and 2015 election, it is failing with this one.

The postponement of the polls alone has done big damage to its repute. It will need to deliver a flawless election to have any chance at redemption.

Also, while INEC claims it has taken measures to guard against vote buying, for instance,  there are numerous cases of parties engaging in the same criminal act. At this point, INEC should have created a better strategy—working with the relevant agencies—to address the problem of vote buying.

INEC has a strong reference in the Electoral Act. It is comprehensive enough to almost perfectly guide its statutory purpose.

The Onus is on INEC

As the new polling dates draw closer, INEC should continue to admonish all parties and their supporters to not make the electoral process any tenser. It must equally make it clear that all violators, as the president warned, will be severely punished—INEC needs to start making examples to serve as deterrence.

Nigerians have endured enough of the unethical politicking by selfish leaders and an almost unreactive electoral umpire. Things must change.

These elections should make a good statement of how improved our democracy can be and reiterate the new desire for a positive change.

Abdulsalam Mahmud is a Nigerian social commentator and a student of conflict resolution at the National Open University of Nigeria (NOUN).