What do Slobodan Milosevic, Robert Mugabe, and Nicolás Maduro have in common? Other than being leaders who kept the Communist Manifesto at their bedside, all three ushered in devastating hyperinflations.

The first hyperinflation occurred during the French Revolution (1789-96) when the mandat collapsed and the monthly inflation rate peaked at 143% in December of 1795. More than a century elapsed before another episode of hyperinflation occurred. Not coincidentally, this period of currency tranquility occurred during the heyday of the gold standard. With the emergence and adoption of fiat currencies, the 20th century ushered in currency instability and inflation. Indeed, since 1900 there have been 57 episodes of hyperinflation. And, five of those episodes can be claimed by Yugoslavia, Zimbabwe, and Venezuela. All are featured in the Hanke-Krus World Hyperinflation Table below, which first appeared in The Routledge Handbook of Major Events in Economic History (2013).

Slobodan Milosevic was in the saddle when inflation last gutted the rump Yugoslavia. The first of his many monetary shenanigans were uncovered on January 7, 1991, when I served as an adviser in the Ante Marković reform government. It was then that we discovered on December 28, 1990, the Milosevic-controlled Serbian Parliament had secretly ordered the Serbian National Bank (a regional central bank) to issue some $1.4 billion in credits to friends of Milosevic. That illegal plunder equaled more than half of all the new money the National Bank of Yugoslavia had planned to emit in 1991. The heist sabotaged the Markovic government’s teetering plans for economic reform and hardened the resolve of leaders in Croatia and Slovenia to break away from Belgrade.

Without the Croats and Slovenes to fleece, Milosevic turned on his own people with a vengeance. Starting in January 1992, what was left of Yugoslavia endured what was at the time the second-highest hyperinflation in world history. It peaked in January 1994, when I measured the monthly inflation rate at 313,000,000%. The Yugoslav hyperinflation episode lasted 24 long months. Nonetheless, Milosevic retained his grip on what was left of Yugoslavia for another six years.

During the 24-month episode, per capita income plunged by more than 50%. Ordinary people were forced to deplete their hard-currency savings. People couldn’t afford to buy food in the free market; they kept from starving by either waiting in long lines at state stores for irregularly supplied rations of low-quality staples or by relying on relatives who lived in the countryside. For long periods, all of Belgrade’s gas stations were closed, with the exception of one that catered to foreigners and embassy personnel. People also spent an inordinate amount of time at the foreign-exchange black markets, where they exchanged huge piles of near-worthless dinars into a single German mark or U.S. dollar note. Milosevic’s monetary madness had destroyed the economy.

Fast forward to March of 2007, when Robert Mugabe was in his 19th year as president of Zimbabwe. The African country was experiencing an episode of hyperinflation that was destroying the economy, pushing more of its inhabitants into poverty, and forcing millions of Zimbabweans to emigrate. In the 1997-2007 period, living standards (as measured by real gross domestic product [GDP] per capita) fell by a stunning 38%. The episode, which peaked at an annual inflation rate of 89.7 sextillion percent—that is 89.7 followed by 20 zeros—in November of 2008, had robbed people of their savings and financial institutions of their capital through real (inflation-adjusted) interest rates that were actually negative. This form of theft occurred, in large part, due to laws and regulations governing financial institutions (pensions funds, insurance companies, building societies, and banks) that forced them to either purchase government treasury bills that yielded only a small fraction of the current inflation rate or make deposits at the Reserve Bank of Zimbabwe (RBZ) that paid no interest.

Around 2000, Robert Mugabe, the President of Zimbabwe, was in need of cash to bribe his enemies and reward his allies. He had to be clever in his approach, given that Zimbabwe’s economy was doing lousy and his people were starving. Sow what did he do? He tapped the country’s printing presses and printed more money. – Marginal Revolution University

So, what was the cause of this economic meltdown? The blame lay at the doorstep of the Zimbabwean government, whose policies forced the RBZ to print money. From January 2005 to May 2007, the RBZ issued currency at a rate that exceeded that of Germany’s central bank from January 1921 to May 1923, the ramp-up phase of the great German hyperinflation. 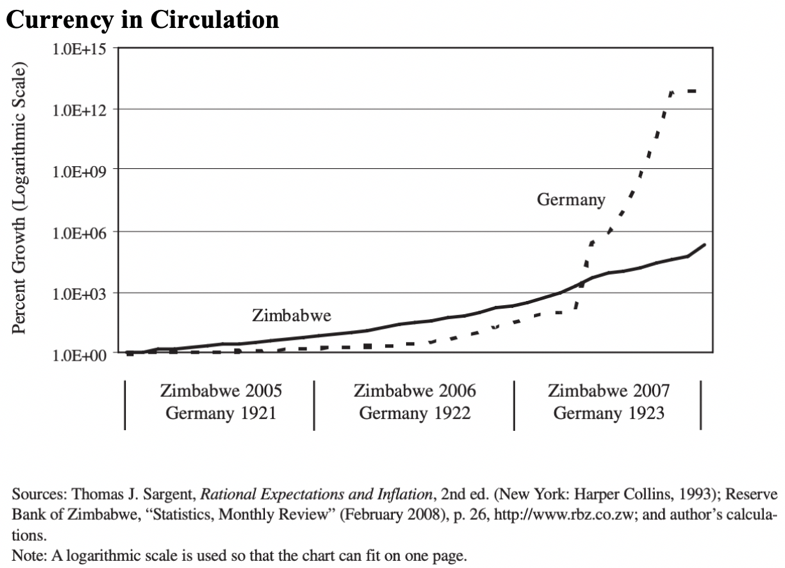 During this period, the RBZ more than doubled its staff, from 618 to 1,360 employees. Despite this 120% increase in staff, the RBZ staff was incapable of producing accurate and timely data—even the most standard economic and financial statistics arrived months late, if at all.

With the help of Alex Kwok and my research assistants at the Johns Hopkins-Cato Institute Troubled Currencies Project, I was able to fill the gap left by the RBZ and accurately measure Zimbabwe’s first hyperinflation episode. By my measurement, the monthly inflation rate peaked at 79.6 billion percent in November of 2008, taking over the rank of second and pushing the Yugoslavia episode to the third most severe episode of hyperinflation. Despite this astronomical figure, Mugabe was able to remain in office for another 9 years. This was due, in part, to the fact that, in early 2009, Zimbabwe dumped the Zimbabwe dollar and officially dollarized.

But, Mugabe never learned the lessons of 2008. When his party, ZANU-PF, regained full control of Zimbabwe in 2013, government spending and public debt surged. To finance its ballooning deficits, the government abandoned full dollarization and started to issue its own currency in enormous amounts. The “New Zim dollar” was issued at par to the U.S. dollar but traded at a significant discount. The money supply, as a result of the New Zim dollar issuance, exploded, and so did inflation.

As night follows day, Zimbabwe experienced its second episode of hyperinflation in less than ten years, starting in September of 2017 and peaking at a monthly inflation rate of 185%. Mugabe had been in the saddle just shy of 30 years, but this was the straw that broke the camel’s back. Zimbabwe’s second episode of hyperinflation opened the door to Mugabe’s ouster in a November 2017 coup d’etat by the Zimbabwe Defense Forces.

At present, there is the only country that is suffering from the ravages of hyperinflation: Venezuela. But, Venezuela’s ongoing episode of hyperinflation did not occur overnight. I observed some of Venezuela’s economic dysfunction first-hand during the 1995-96 period when I acted as President Rafael Caldera’s adviser. But, it wasn’t until 1999, when Hugo Chavez was installed as president, that the socialist seeds of Venezuela’s current meltdown started to be planted. With Chavez’s ascendancy, fiscal and monetary discipline deteriorated, and inflation ratcheted up. By the time President Nicolas Maduro arrived in early 2013, annual inflation was rising into the triple digits and Venezuela was entering an economic death spiral. 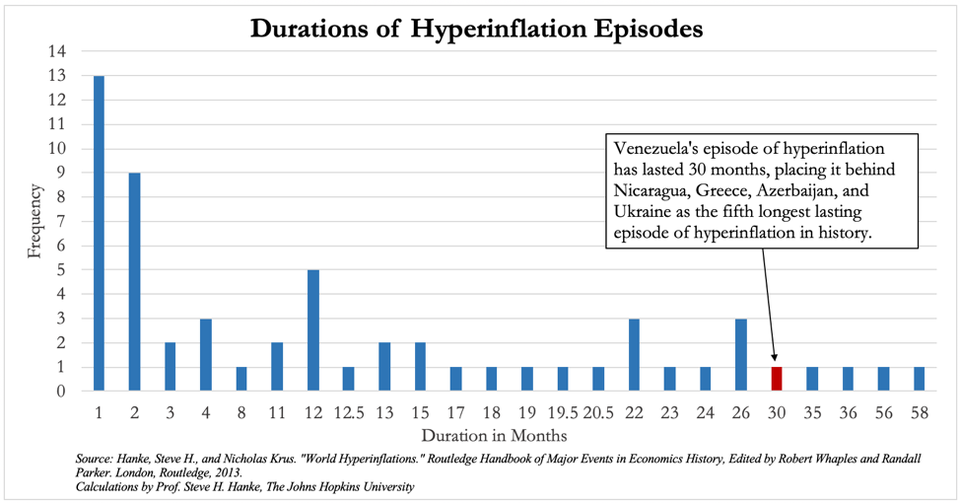 While hyperinflation is not a recipe for building a politician’s popular support, it is not a certain death knell, either. The three Ms—Milosevic, Mugabe, and Maduro—attest to the fact that monetary madmen can hang onto power for years after the onset of devastating hyperinflations.

Steve Hanke is a professor of applied economics at The Johns Hopkins University and senior fellow at the Cato Institute. He is a columnist at Forbes and a regular contributor to The Wall Street Journal. Over four decades Hanke has advised dozens of world leaders from Ronald Reagan to Indonesia’s Suharto on currency reforms, infrastructure development, privatization, and how to tame hyperinflation. You can follow him on twitter @steve_hanke.