The recent protest by officers of the Nigerian Prisons Service (NPS) over unpaid six-year promotion arrears has unfortunately brought the badly run prisons system into the news again. Prisons across the country are ravaged and congested, with up to three-quarters of inmates awaiting trials for years without convictions. Data from the National Bureau of Statistics (NBS) even suggests most of these prisoners may be innocent of the crimes for which they are incarcerated. These deficiencies are connected to the lack of funds and the poor administration of the criminal justice system and the unethical practices of the Nigeria Police Force.

Amnesty researchers in Nigeria also uncovered fresh allegations that soldiers have raped women in the Giwa Barracks detention facility. Three former female detainees independently said they had witnessed such attacks and identified 10 of the male soldiers responsible – including five who worked in the detention center’s health clinic. Two of these former detainees were women who said they had been sexually violated themselves. – Amnesty International.

To efficiently address this problem, though, the government should avail prisons more funds to improve operations The judicial system should also be reformed to enhance the speed and accuracy of proceedings, especially cases of petty offenses—many of which are directly caused by poverty—including hawking, loitering or sex work; they should be decriminalized. As a follow-up policy, the police should be forbidden from illegally suspects while those detained should be treated with respect for all their civil rights.

What the Reports are Saying

In his 1862 book, ‘The House of the Dead,’ nineteenth-century Russian philosopher, Fyodor Dostoyevsky observed that “the degree of civilization in a society can be judged by entering its prisons.” As if Dostoyevsky had directed the line at Amnesty International, a 2008 report by the advocacy group on an examination of the country’s prison was startling. It detailed how prisoners’ rights were systematically abused. It chronicled facilities that were dangerously overcrowded with poor sanitation, lack of food and medicine for prisoners, and lack of educational services. It also revealed that many prisoners are often denied visitation by families and friends.

It also claimed that besides pre-trial detainees, some prisons hold children and individuals with mental illness, whose families brought to prison for care. Although nearly all prisons in Nigeria are not built to hold people with mental disabilities or juveniles, they do, however, subject them to the same conditions as high profile convicts. The report went further to proof that wardens extort inmates by demanding they pay bribes before they could be allowed to seek medical care or contact relatives.

Despite these report and those made by other groups like the International Center for Investigative Reporting,  the Nigerian government has turned deaf ears. 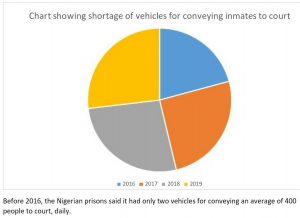 The Nigerian court system is at the center of the whole disaster, especially as shown in how it handles criminal cases. For instance, there are numerous situations when criminal cases are continuously adjourned because witnesses cannot be brought to hearings for testimony by the prosecutors due to poor funding. In some cases, presiding judges had personally paid for the transportation and hospitality costs of witnesses so that cases could be adjudicated and closed. In some horrific cases, though, the defendant will spend a lot of time waiting in court without deliberation because the court could not find their file, which in many cases have either been lost or stolen—outrageous how that may sound.

More so, although Article 35(9) of the Nigerian 1999 Constitution provides that “all inmates awaiting trial have the right to be presumed innocent until proven guilty,” the presumption of innocence is almost totally alien to the country’s judicial system. But the presumption of innocence is vital to fair judicial prosecution. And in the cause of fairness, misdemeanors like hawking, loitering, and sex work should not be punishable by prison terms but by other lighter means like community service—if even necessary.

The Nigerian government should provide more funds for the renovation of prisons and rehabilitation of inmates, and ensure that the funds are duly spent.

It should make provision for adequate legal aid to represent non-privileged detainees, who cannot afford lawyers in court. The government should also allow and encourage the establishment of privately-run prisons to reduce congestion in state facilities while also boosting that part of the economy.

Nonetheless, the police and the civil society should educate detainees about their rights, especially as regards legal representation and fair processing.

Muneer Yaqub is a Writing Fellow at African Liberty, a Nigerian social commentator, and journalist. He is a student of microbiology at the Usmanu Danfodiyo University, Sokoto, Nigeria. He can be reached on Twitter via @elmunir5.