Ending Poverty with Enterprise: According to Afrobeats’ Burna Boy

Since its release in March 2019, BET International Best Act, Burna Boy’s song, Dangote, has continued to record impressive playtime in Nigeria. The song was inspired by the personality of Africa’s richest man, Aliko Dangote. Dangote is currently worth a whopping $10.3 billion in assets mostly tied to his cement, sugar, and flour manufacturing businesses. But besides the reference to Dangote’s wealth and the fascinating beats of the song, it leaves young listeners with an unusual, yet important lesson; It is a song that could inspire the next generation to embrace enterprise while freeing themselves and their country from poverty.

While keeping to the heart-moving afrobeat sound, Burna Boy touched on the serious problem of poverty in Nigeria—the country has more people in poverty than any other country in the world. Burna Boy sounds his audience a lesson when he iterates that despite the riches of Dangote, he still goes to work every morning. The lyrics also covers a range of issues centered around productivity, persistence, the promotion of talent, and supporting the less privileged.

This raw adaptation of the daily struggles of Nigerians into the high-tempo Afrobeat genre has brought Burna Boy comparisons with Fela Kuti, who many consider as Africa’s greatest musician.

Interestingly, having devoted the entire song and title to the richest man in Africa, Burna Boy ended the song with a mention of other top Nigerian billionaires. He referenced the likes of Michael Adenuga, Folorunso Alakija, and others—some of whom have inspiring stories of struggles towards success.

The song’s video carries as much imagery as the audio track. In the video, Burna Boy presented a picture of the average Nigerian’s struggle with life including quarrels over money, slum life, petty theft, family feud, police brutality, and sexual harassment.

The video ended with a young schoolboy guarded by men in masks while he is hailed by an excited crowd. The boy settled into a seat as he follows the Dangote song rolling on the television. He then brought out a stash of money and relaxed his legs on a table. Some have interpreted this ending as a piece of advice, that if  Nigerians can connect with their roots and apply the lessons of enterprise and hard work, the future will be promising.

But it is not enough to rock and roll to the obviously fascinating sounds of the song. Nigerian youths must rise to the challenges of poverty and financial insecurity.

Burna Boy did not call on the government to fight poverty in this song but drew attention to the role of the individual. Despite the country’s precarious economic situation, it still presents numerous opportunities for young people to create wealth by providing simple entrepreneurial solutions. 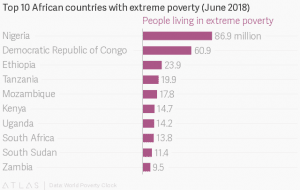 Apart from skills acquisition and developing expertise in a specific field, young people need to learn to be good marketers of their skills, ideas, business, products, and services. Burna Boy’s self-marketing in this song deserves special mention as he hyped himself as a top-quality musician and hustler. He bragged in one of the Yoruba verses, that he is the rave of the moment who sings well to the beat while challenging his audience to find out from Kel P, his producer.

If the goal of entrepreneurship is to end poverty, it will be important for Nigerians to share the resources among themselves, especially with the less privileged. Like Burna Boy advised, “be a sponsor,” if you can’t, then aspire to be.

Perhaps the strongest message of the song is that if Dangote is still working to make more money, no Nigerian should have reasons not to work. This is especially important for young people who may be tempted to give up on their dreams due to the many perils in the country.

If Nigerian youths can embrace the message in this well-crafted song—well beyond dancing to its fascinating beats, the country could be well on the path to breaking its poverty shackles.

Feyisade Adeyemi is a Writing Fellow at African Liberty. He is Academic Director at African Students for Liberty and teaches African Ideas of Liberty on Udemy. He is on Twitter @Thisischale.

Opinion
Will the Nigeria Police Force Ever be Reformed?
Human Rights
How Nigerian Women are Redefining Gender Roles
Economics
What is the Future of Africa’s Creator Economy?