“The Government Doesn’t Owe You,” According to South Africa’s NHI

Following the discussions about the NHI (National Health Insurance), I am struck by how little regard is given to self-ownership. To preclude the possibility of ownership by someone else, self-ownership is a necessity. Black Africans were enslaved in the Americas because their self-ownership was not recognized.

Your right to own yourself is the basis of your freedom and not merely a tool to be used by others for achieving their own ends. Given this, the most immediate consequence of owning yourself is ownership of your own labor. This extends naturally then to what you can exchange for that labor.

Currently, in South Africa, many working people choose to exchange a part of their labor for a medical aid scheme that works best for them. This basic choice will be done away with when NHI comes into effect. There will then be only one payer, government, with the right to refuse to pay for something that you may previously have had covered. Tough luck, and they’ll take your money anyway. This translates into a part of your labor being stolen by the government under the guise of it being for “the good of the people”.

To compound the problem, medical schemes have reserves which belong to the members of the schemes.

The concept of social solidarity is a sneaky way of appropriating your freedom to choose what to do with your labor and how to run your life. It implies that the government owns you if there’s a great enough need. Will there come a day when these people make the case that total, instead of partial, slavery is acceptable if a great enough need has been established?

To compound the problem, medical schemes have reserves which belong to the members of the schemes. There has been no clarity from the government as to what will happen to those reserves when medical aid schemes become defunct or are reduced in terms of the scope of what they can cover. If these reserves are transferred to the NHI, it will mean the accumulated property (the product of their labor) of medical scheme members will simply be stolen, that’s what we call it when your property is taken against your will.

The NHI does not only imply that medical aid scheme members and taxpayers are nothing more than a means towards government ends, but it also implies that doctors and other healthcare workers do not own their own labor. As a single-payer, the government will effectively decide how much these people can earn for their services. If they refuse the government price, no matter how good they are at their job, they will simply have no patients sent their way. 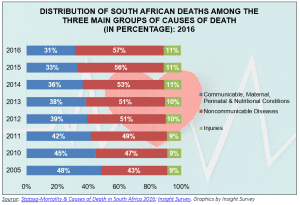 This is not to say taxing individuals to fund the voucher program is moral. It just means that we recognize that poor people are in the position they are in because of government policy.

These are only some of the implications of an NHI. This is not to say we should just ignore the plight of the poor in this country – those people who have been slaves to government whim due to being unable to sell their labor under conditions of their own choosing, or having their property rights unrecognized because the government would much rather appease traditional leaders. This is why something like a voucher system for healthcare is necessary as a temporary measure until these violations of the human rights of the poor are rectified.

With a voucher system, a poor person would no longer be forced to use state hospitals and be subjected to their shocking record of service. Instead, they would have the choice as to which healthcare provider to use, as well as how the service is to be paid for, unlike under the NHI. South Africa has a poverty crisis precisely because the poor are not trusted with choices. No single group in South Africa has its natural right to self-ownership undermined as much as poor people.

This is not to say taxing individuals to fund the voucher program is moral. It just means that we recognize that poor people are in the position they are in because of government policy. Just like we did when it comes to the land restitution program. The program would not only be time-limited but also conditional on labor market reform. It would have to be accompanied by a general liberalization of the economy to enable the poorest among us to make it onto the first rung of the economic ladder and eventually afford their own healthcare.

It is unfortunate that the country finds itself in this position given the hope for freedom that was present in 1994. As a black person, the greater degree of self-ownership I have achieved under this government could never have happened under the apartheid regime. This is not a favor that the government did for me, it was simply the restoration of my natural birthright. In the same way that the blood and treasure (savings and capital stock) lost in the American civil war was a necessary price to pay for restoring to those who were enslaved their natural rights.

Mpiyakhe Dhlamini is a data science researcher at the Free Market Foundation. The views expressed in the article are the author’s and are not necessarily shared by the members of the Foundation.