We save in order to spend in the future. To do this effectively, we need to know that our future spending power will be at least equal to current spending power, that the savings will “store value”. In this article I argue that global central banks have eroded “store of value” characteristics from traditional financial markets, such as cash and bonds, leaving investors to rely on property and equity as a quasi store of value instruments. Negative interest rates raise the attractiveness of the age-old store of value, gold, and the store of value for the digital age, bitcoin.

Dollars and rands stored value in the past but, almost without exception, government-issued monies do not hold value today. Using the relevant Consumer Price Index (CPI) in order to adjust the purchasing power of 1972 US dollars and South African rands (ZAR). Inflation has eroded purchasing power to such an extent that money is worth a fraction of what it was in 1972. 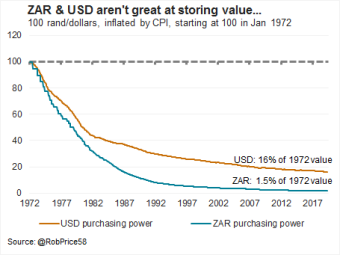 Why? We create a lot of these currencies. South Africa has created many more rands than the United States has created dollars, hence rands have depreciated more than dollars. The less scarce, the worse an asset holds its value. If Apple created 10 trillion iPhones would they have the same value? No. If lots of iPhones were to flood the market, it would make them less valuable and reduce the price. 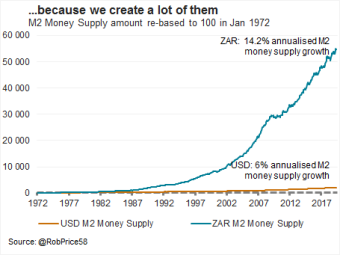 Rather than just hold cash, we could hold short-term interest instruments. If the instruments yield interest above inflation then we know that our savings can beat inflation. The chart below shows the way in which real interest rates (interest rate less inflation) in the US and South Africa have gradually trended lower, reducing the ability to store value in these short-dated interest instruments. SA investors could store value in rands but they assume currency risk in this scenario, i.e., the rand could depreciate and erode global purchasing power. 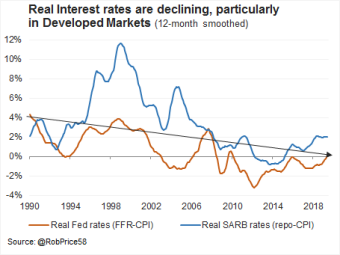 Alternatively, we could purchase longer-dated debt instruments (bonds), issued by governments or corporates. If the real bond yields (yield less inflation) are positive, our value might be maintained relative to inflation. Makes sense… but the uncertainty and risk increase notably at this point. What if inflation rises? What if government credit risk deteriorates and the bond loses value? 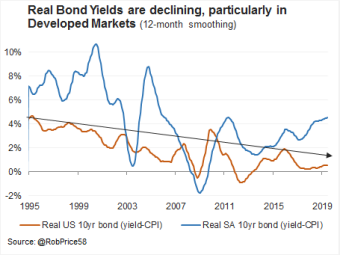 Bond yields are close to record lows across the developed world despite record-high debt levels, so the probability that these assets will hold their value over the coming years is incredibly low. South Africa isn’t in nearly as an extreme situation like the developed world but the trend is the same. Lower rates, lower growth, higher debt, and deteriorating credit risk. The graph below shows real index returns on SA bonds (in rands) and US bonds (in USD). Real US bond returns have flat-lined, while SA bonds have managed to keep pace with SA inflation so perhaps SA investors are able to store value in bonds if they’re willing to assume currency, volatility and credit risks of the government. 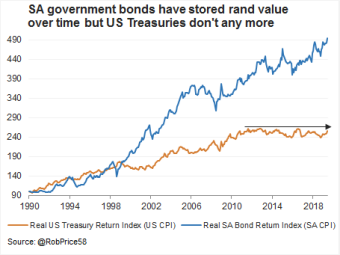 Another alternative to store value is financial assets, like equity and property. These assets are directly linked to economic activity, through revenues, rentals and asset ownership, so extended periods when they underperform inflation are rare. Most people don’t view these financial assets as stores of their value. Clearly, there is a grey area but some people are definitely using these assets as growth generating investments AND stores of value because we cannot store our value in money or short-term interest rates. On reflection, many people use properties as bank accounts, dipping into their bond during periods of financial stress (dis-saving) and paying down the bond during better times (saving). Data (below) suggests that property was a prudent investment strategy prior to the sub-prime mortgage bubble in 2008 but that property markets have failed to beat inflation effectively thereafter. 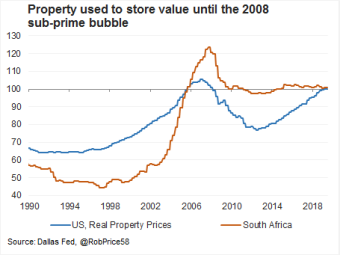 With equity, there are times when real returns are negative, exposing savers to volatility and draw-downs, but they’re certainly positive through time. Property and equity generally benefit from lower interest rates because people tend to use debt to purchase these assets. Additionally, interest rates are the discount parameter used when valuing future corporate incomes. As interest rates fall and debt rises, the price of property and equity might continue to rise. It is, however, also important to note that these assets aren’t cheap today so the long-term return potential isn’t as wonderful as it has been. Low-interest rates also hinder long-term sustainable economic activity by dissuading savings and encouraging capital consumption, which dampens the long-term return potential from these growth-centric asset classes. 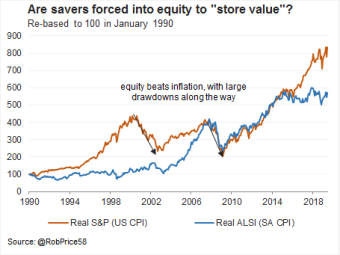 ‘Precious’ for a Reason

Gold has been used as a pure store of value throughout history because it’s scarce, difficult to mine and has limited productive usage. There is a finite amount of gold in the world; approximately 190K tonnes above ground and supply only grows between 1% and 2% each year. Unlike government-issued monies, where the central bank can just create more, it’s tough to increase gold supply. Unlike most other commodities, gold is also not really used in production so it’s never destroyed. The stock of gold above the ground continues to grow, which implies that the ratio between the existing stock and the flow of newly available gold is incredibly high. In fact, gold’s stock-to-flow ratio is the highest amongst all commodities, which is exactly why the market chose gold as the monetary medium for thousands of years. It’s called a “precious” metal for a reason and it’s not because it’s yellow and shiny! Silver has similar characteristics to gold, but not nearly as high a stock-to-flow ratio, which is why silver has been called “the poor man’s gold” and used as a risky alternative to gold. 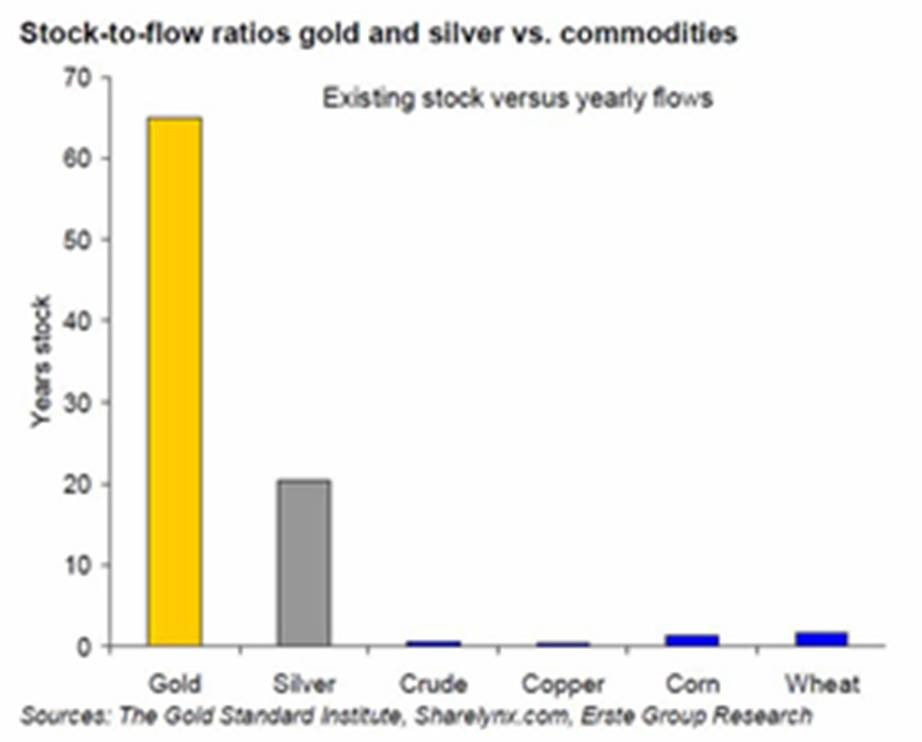 Clearly gold is more volatile than fiat currencies but, through the cycle, it has a superior ability to maintain purchasing power. 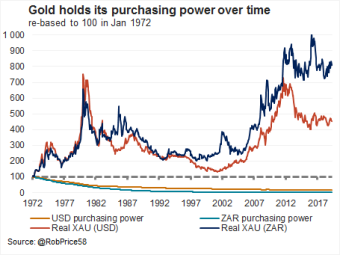 What the Future Holds

Since the 1980s, central banks have used low-interest-rate policy to stimulate economic activity without considering the consequences of their actions. Post-2000 policies went full whack-a-mole with negative rates and Quantitative Easing. Bond yields are negative in Japan and Europe, which is extraordinary! Bondholders pay the government for holding their debt! The further central banks exacerbate this monetary corruption trend, the greater the likelihood of negative interest rates on actual bank deposits – criminal. 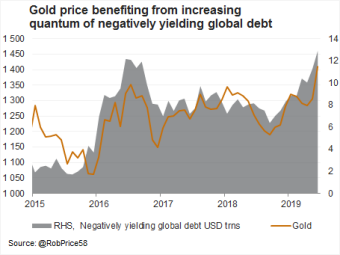 Where people could historically store their savings in money, lower and lower rates implied that investors had to seek out alternative stores of value. Bonds, property, art, classic cars, or equity are options but they all come with their own risks and they aren’t the intended use-case for these assets. As central banks exacerbate the negative interest rate path and this pushes debt deeper into negative yields, investors will become increasingly interested in stores of value like gold. Bitcoin is a complex and unregulated technology with a host of risks but it holds similar constrained-supply-characteristics to gold. Continued global monetary corruption is the primary reason for the increasing demand for a store of value technologies.

Rob Price is an investor at an Asset Management firm in Johannesburg.