When young Americans grow up, rarely do you hear them being excited about going to study in Europe when they leave school. Why would they be? They have world-class universities and immense opportunities at home. It is not uncommon, however, to speak to young South Africans who are keen to leave this country either for extended periods or indefinitely. This is not because our universities are bad by any measure but because space is limited and higher education is becoming dominated by politics. Politics has also caused an opportunity drain in South Africa, with few available jobs, little innovation, and an increasingly-hostile political class.

It is often said that the youth are our future. Despite the annoying obviousness and lack of insight inherent in this saying, it is factually true. For all our sakes, it means that students need to be equipped with the knowledge and provided with an environment in which to succeed, rather than an environment of control, spite, and resentment. 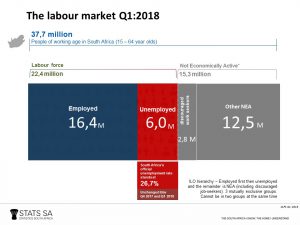 SA’s development has been shackled by state control for centuries. With unemployment approaching 10 million people, most of whom are young, this reality is quickly catching up to us. For young people to fulfill their potential, they must be free from state interference. Complicated and unnecessary labor regulations prevent and discourage businesses from hiring younger people. A young person may be willing to work for less than what the national minimum wage (NMW) dictates — but because of the NMW, not be allowed to negotiate with a business on their own terms.

Why would a firm hire a newly-matriculated individual instead of a degreed individual willing to work for the same meager R3,500 per month? In a low-skill, low-growth economy such as ours, it is imperative that people be allowed to compete with one another on the price of their labor. Indeed, the NMW succeeds only in pricing people with low or no skills (usually youth) completely out of the market. For many, work experience is more important than a bigger paycheck, but because of the massive amount of regulation, there is very little scope for negotiation between parties.

Bad economic circumstances have bred an unfortunate mentality of entitlement among our peers. There is a tendency to seek out free things rather than freedom. This was most evident during the FeesMustFall protests, which were premised on the flawed and baseless idea that individuals are entitled to receive a specialized, university education from world-renowned experts for free. But activism for real, freed education, would instead have taken the form of protests demanding the government release its stranglehold on South Africa’s higher education sector, and allow private tertiary education providers to compete with one another and with the public university system.

The private sector would leap at the opportunity to enter a deregulated education market. Companies and firms would have to compete with each other to attract students, and it would be in their interest to cater to the majority of South Africans. A further benefit of competition in education would be the lowering of costs, as ‘free’ education is, in its current guise, definitely not free. Some beleaguered taxpayer, somewhere down the line, has to pay for it. In a deregulated, competition-rich education market, new universities would spring up around the country, increasing the space available for students and sending those firms into a frenzy to attract students to their campuses. They cannot do this without competing on price.

The money the state is currently pouring into providing low-quality education for all could be used to improve the education services on offer, especially at lower levels, for the truly impoverished. But as long as we rely on the state to provide us with education (and many other things) we will have to get used to a low-quality product, with all the political resentment, spitefulness, and hostility that comes with it.

It is true that we have not attained freedom for all in SA, years after the first democratic elections in 1994. The state has increased its reach into almost every area of our lives, and people aren’t free to try and stand on their own. Instead, the state tries to force us to rely on it as much as possible. It appears that far from moving towards freedom — which, if it is to mean anything substantial, must mean free markets, free speech, and free thought — we are moving towards a more paternalistic society. This does not engender a culture of responsibility and innovation among our youth.

We do young people a serious disservice when we lament how many younger people are struggling and unemployed, yet we support policies which significantly hinder that younger generations’ opportunities in life. From high taxation to grand government programs like National Health Insurance and expropriation without compensation, the state is growing at the cost of individual freedom and responsibility. More and more young people are trying to head overseas because of it. They know that if they become successful in SA, they will be suffocated by high taxes and demands to help bail out failing state-owned enterprises. Young people are taught, not that their lives are their own, but that they will need to dedicate themselves to sustaining the state, the political class, and its impoverished philosophy.

If the state does not reduce its role in the lives of young people, it is merely paying lip service to the sacrifices made by those who fought against Apartheid to secure true freedom for all. The Human Rights Commission has definitively (and likely errantly) held the slogan “land or death” to be hate speech. But perhaps it is time for our youth to take a note from the American founding father Patrick Henry, who in 1775 called upon Virginia to supply troops to fight tyranny, with these simple words: “Give me liberty, or give me death!”

Hattingh has an M.Phil from Stellenbosch University and Van Staden has an LL.B. from the University of Pretoria. Both are researchers at the Free Market Foundation.