In the Economic Freedom of the World (EFW) 2019 Report, South Africa ranks 101 out of 162 countries. This is a fall of two places from last year but is a massive fall of 54 places since 2000 when the country achieved an enviable ranking of 47 and was in the top 30 percent of economically free countries. With such an upward trend SA was on track to be one of the world’s most prosperous countries, but instead, in 2019, South Africans have less economic freedom than do residents in 60 percent of the democratic world. Far from building on its post-apartheid achievement, SA citizens now have less economic freedom than they gained in the six years since 1994 and democracy.

This was the solemn message given by Neil Emerick* at the 12 September EFW 2019 launch event hosted by the Free Market Foundation (FMF).

The EFW index measures the degree to which a country’s policies and institutions support economic freedom and is the premier measurement of economic systems. There are five main components: the size of government; legal structure and security of property rights; access to sound money; freedom to trade internationally; and regulation of credit, labor, and business. In the past 5 years, South Africa’s largest falls are Compliance cost of importing and exporting, down from 7.5 to 4.7; Extra payments/Bribes from 7.5.5 to 2.8, and Protection of Property Rights from 7.7 to 5.4.

Countries that score highest on the EFW index are among the most prosperous, healthiest, cleanest, and safest places to live, according to peer review research. A lack of economic freedom condemns countries to lower incomes, greater poverty, more inequality, reduced life expectancy, fewer political rights and liberties, and bleak prospects for the quality of life. 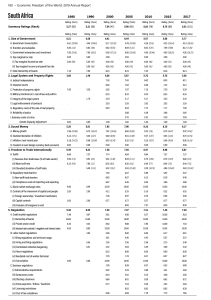 Hong Kong and Singapore continue to take the top two positions, followed by New Zealand, Switzerland, United States, Ireland, United Kingdom, Canada, Australia, and Mauritius in the top 10. Other notable countries include Japan (17), Germany (20), France (50), Russia (85) and China (113). The 10 lowest-rated countries are, unsurprisingly, Iraq, Republic of Congo, Egypt, Syria, Democratic Republic of Congo, Angola, Algeria, Sudan, Libya, and, lastly, Venezuela. Some despotic backward countries such as North Korea and Cuba cannot be ranked due to lack of data. Notably, many former communist countries are rising in the rankings as their governments pursue policies to deliver economic freedom for their citizens.

Nations that are economically free out-perform non-free nations in all recognized indicators of well-being. The 2019 report based on the latest figures available (2017), nations in the top quartile of economic freedom enjoyed:

Other positive outcomes include:
•    Political and civil liberties are considerably higher.
•    Gender equality is greater in economically free nations and happiness levels.

“South Africa’s government continues the reduction of its citizens’ economic freedoms.”   Followers of this index will not be surprised to see falling investment in South Africa, lack of business confidence, and increased scrutiny from international agencies,” said Emerick.

South Africa’s EFW nose dive has predictable consequences. The unemployment rate is the highest in recorded history and the country is witnessing dramatic human and capital flight as individuals seek to invest and live in countries with greater levels of economic freedom.

South African policymakers seeking to halt and reverse these trends have a clear choice – they can either continue down the road of implementing failed socialist policies or they can embrace policies that lead to greater levels of economic freedom.

In his introduction to the EFW 2019 Report, Professor of Finance and Economics, Richard J Grant, Cumberland University, Tennesse, reminds us that economics is entirely about human relationships and that there is no ‘economy’ without exchange between at least two people. “Unemployment is not a consequence of structural problems but of increasing government interference in citizens’ lives and economic interventions. The many structural problems are not the primary problem but the symptom of a loss of economic freedom. The root of the problem is in the legal barriers placed in the way of the natural development of human relations.”

Governments cannot force prosperity; they can only allow it.

*Neil Emerick is an associate of the Free Market Foundation and the developer of the software tool used to interrogate the EFW data.