Abiy’s Noble Peace Prize is Not Only for ‘Work Done,’ But for that Still Ahead

Ethiopian Prime Minister Abiy Ahmed’s Nobel Peace Prize indicates his critical role in building long-term peace in the war-torn Horn of Africa region. He has made important breakthroughs in deeply protracted conflicts, although much remains to be done to institutionalize and sustain these endeavors. Some critics have asked if this recognition came too early, as the 43-year-old Abiy has been prime minister for only 18 months. But as has been the case with a number of awards, such as that given to U.S. President Barack Obama in his first year in office—this honor may be seen as a recognition of and encouragement for a project worth supporting rather than a prize for a job well done.

Yet Abiy has also managed real achievements in that short time. The Norwegian Nobel Committee emphasized Abiy’s “decisive initiative to resolve the border conflict with neighboring Eritrea” when it announced the award. The 1998-2000 border war between Ethiopia and Eritrea was devastating, with an estimated 100,000 deaths and a generation of developmental potential squandered. Since 2000, a costly stalemate has persisted, along with a failed United Nations peacekeeping mission and an unimplemented border demarcation decision. All this has meant little progress toward peace.

Abiy became prime minister at a time of deep crisis in Ethiopia. The Ethiopian People’s Revolutionary Democratic Front had been in power since 1991. It was a powerful authoritarian party, with a membership of 7 million, control over huge party-run endowment funds that dominated the economy, and the capacity to win 100 percent of parliamentary seats, as it did in the 2015 elections. Civil society and independent media were effectively closed down.

In 2016, however, sustained protests by young activists in the populous region of Oromia followed later by Amhara, shook the regime. Despite imposing two states of emergency and arresting thousands of people, the ruling party lost control of key parts of the countryside and seemed paralyzed. In early 2018, many thought that Ethiopia was on the brink of collapse.

Abiy and a group of young reformers saw an opportunity and positioned themselves both as sympathetic to the anger on the “Oromo street” and as reliable ruling party stalwarts who could speak to those who feared that regional centrifugal forces would destroy Ethiopian unity. The April 2018 inauguration of Abiy provided needed breathing space and the chance to walk back from the brink. He was initially wildly popular, and a period of “Abiymania” broke out in Ethiopia and among Ethiopians in the diaspora. The symbolism of a young leader from the marginalized Oromia region rising to the top leadership post was enormous.

One of Abiy’s first acts upon becoming prime minister was to fly to Eritrea and meet with President Isaias Afwerki. This surprising and dramatic gesture of conciliation broke the protracted impasse and was followed by Isaias’s visit to Ethiopia, the opening of transportation and communication links, and emotional people-to-people exchanges as families and communities reestablished contact. There remains, however, significant work to be done to institutionalize the relationship, implement the border agreement, and establish mutually beneficial trade relations.

The protests that brought Abiy to power also resulted in a weakening of the state’s ability to maintain stability.

In addition to taking the first steps to normalize relations with Eritrea, Abiy spearheaded initiatives to broker peace in South Sudan, encourage the political transition in Sudan, and tried to broker an agreement between Somalia and Kenya over a maritime dispute. This remarkable set of activities harks back to the leadership roles played by former Prime Minister Meles Zenawi and Emperor Haile Selassie in deploying Ethiopia’s position as a historical leader on the continent to promote peacemaking. Ethiopia is the largest contributor of troops to U.N. peacekeeping, particularly in Africa. In the war-torn Horn of Africa, Abiy has been at the center of a variety of efforts to make peace, and while results are tentative and incomplete, the work should be lauded and supported. 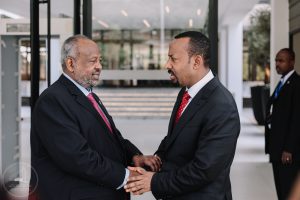 Isaias, Abiy’s partner in the process of detente with Eritrea, was not awarded the prize. Despite the lessening of tensions with Addis Ababa, Asmara has made less progress in putting in place a constitutional government with space for civil society than many hoped.

Progress in Ethiopia, in contrast, has been fast. The 2018 transition dramatically opened up political space in a state that had effectively criminalized dissent.

Political prisoners were released, the repressive civil society law scrapped, and independent media rebounded. Exiled movements that had been labeled as terrorists—such as Ginbot 7, the Oromo Liberation Front (OLF), and the Ogaden National Liberation Front—agreed to end their armed struggles and returned to Ethiopia and registered as political parties. Leaders from civil society and the opposition were appointed to key posts in the National Election Board, Human Rights Commission, and as the chief justice of the Federal Supreme Court. The new Ministry of Peace was led by a woman, as were 50 percent of the cabinet positions. A truth and reconciliation commission was established, and multiparty elections are being organized for May 2020.

Yet this domestic process of peacemaking and reform has been difficult and contentious. The transition has been characterized by populist and deeply polarizing identity politics, with claims of grievance and demonization of ethnic competitors dominating narratives. New political actors, such as the National Movement of Amhara, have mobilized in ways that have polarized populations; Sidama activists in the southern region have won the right to hold a referendum that threatens the viability of existing borders within southern Ethiopia; and the OLF, as well as the Oromo Federalist Congress, are challenging the ruling party in Oromia.

Ethiopia’s prime minister oversaw the chaotic release of thousands of prisoners, including many ethnonationalist militants. His amnesty may now be coming back to haunt him.

Militias with unclear relations to local political figures engaged in violence to settle scores and seize land and other economic assets. Clashes between ethnically defined regional states, against minorities such as the Qemant, and in cities such as Hawassa, Moyale, and Burayu (on the edge of Addis Ababa) escalated and challenged the progress of Abiy’s domestic political reforms. At one point, an estimated 3 million people were internally displaced, the highest number in the world.At the same time, civil society groups such as the Ethiopian Lawyers Association are reemerging and working hard to create national networks to monitor elections, and opposition political parties have the space to organize and develop links to their putative constituencies. In the Somali regional state, the brutal reign of Abdi “Iley” Mohamoud Omar and his special police has ended, and the new regional leader, Mustafa Muhummed Omer, has started political rebuilding that has extraordinary potential.

At this point—after just 18 months in power—Abiy’s accomplishments deserve recognition and support but also remain brittle works in progress. The opening with Eritrea has been a major step toward peace but still needs to be institutionalized in agreements regarding borders and trade. The domestic context is very unstable, with significant levels of violence and displacement and a polarized political scene in the lead-up to elections next year, but the political space has been opened. Important steps have been taken, but difficult work remains to realize the benefits of peace.

It is important that an African country and an African leader have at least a brief period of recognition in the global media as actors struggling creatively with very difficult problems. For a country and continent too often scorned by easy generalizations about unending conflict, pervasive corruption, and bad governance, a moment that acknowledges the much more complicated reality is itself worth celebrating.

The nature of the Nobel Peace Prize is to recognize individual leaders or organizations rather than the everyday business of building and institutionalizing peace. The ultimate disposition of Abiy’s dramatic initiatives remains to be seen, as hard political bargains and the processes needed to embed regional initiatives in concrete agreements are still incomplete.

Sustaining peace, both regionally and domestically, requires the building of institutions, as Abiy and his team know well. If the Nobel Peace Prize energizes these initiatives that engage not only Abiy but a range of political and civil society actors and leaders of regional states, then the prize will serve to advance peace in a region that is ready for it. The Norwegian Nobel Committee said Abiy’s “efforts deserve recognition and need encouragement.” The award bolsters hope, something that is always welcome in a war-torn region.

Terrence Lyons is an Associate Professor of Conflict Resolution at the School of Conflict Analysis and Resolution, George Mason University.