Why are Putin’s supporters desperate for Africa’s Alliance?

Since the beginning of the offensive against Kiev, one snapshot has been a favourite on social media: it shows a man presented as the chief of the Kremlin alongside former presidents Samora Machel and Emmerson Mnangagwa. But its authenticity is highly dubious.

Vladimir Putin needs Africa. He needs the counterweight of African leaders who, by their abstention, added nuance to the United Nations General Assembly resolutions condemning the Russian intervention in Ukraine.

He also needs the neutrality of the African population that Kiev is trying to recruit into its “international legion”. It is therefore logical that in the communication war, the Kremlin boss’ flatterers haven’t hesitated to exploit all forms of storytelling to explain the extent to which the Russian president has devoted his life to the [African] continent. 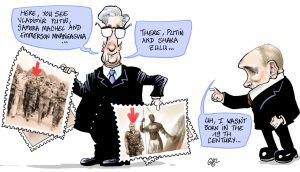 Since the start of the conflict in Ukraine, a black and white photograph has been circulating on social media. Viral posts explain that it depicts Putin, in 1973, alongside Samora Machel and Emmerson Mnangagwa, future presidents of Mozambique and Zimbabwe. The photo was allegedly taken at a Tanzanian military training camp dedicated to southern African independence movements.

The mystery man also wears his watch on his left wrist, whereas Putin usually wears it on his right.

In 2018, a blog claimed that the Russian had trained freedom fighters for four years. In 2022, [Some] African Twitter users [can also keep original, “twitto” but not as well known in English] have been quick to conclude that “every African on earth should support President Putin and Russia in this struggle’” against “colonialism and imperialism’”.

But storytelling rhymes with fact-checking (or almost). The official biography of the Russian leader indicates that he studied at Leningrad State University until 1975. Moreover, the Tanzania military training was allegedly provided by Chinese, not Soviet, instructors. As for Emmerson Mnangagwa, in 1973 he was in jail, in the hands of the Southern Rhodesian government.

Instead of Tanzania, others believe they recognise Mozambique in the mid-1980s. This poses a new problem: between 1985 and 1990, Russia’s current leader worked for the KGB in East Germany. His status as a low-ranking officer would probably not have given him access, a few years earlier, to a position as a leading member of a training delegation.

And since the devil is in the details, note that Putin was only an intelligence officer, while the man in the disputed photo is wearing military boots. The mystery man also wears his watch on his left wrist, whereas Putin usually wears it on his right. Finally, in the picture, the real-fake Putin looks much older than 21, his actual age in 1973. Even more than 30-something, assuming the photo was taken in the 1980s.

Damien Glez is a French/Burkinabé artist and editorialist.

First appeared in The Africa Report.

Photo by Ignat Kushanrev on Unsplash.