Why is Understanding ‘Tolerance’ so Complicated in Africa?

The violence against innocent worshippers in Sri Lanka brings back to mind the Christchurch killings in New Zealand. Both were results of hate and intolerance. For the many African countries facing similar problems, they may well have lessons to learn from them and the expert opinions that have trailed these incidents. In an article published shortly after the Christchurch shootings, Will Harvie reminded his readers that there should be no tolerance for the intolerant. This idea had also been mooted in The Open Society and its Enemies, a book that was written during World War II by Austrian philosopher, Karl Popper in Christchurch, New Zealand—the same city of the horrific mosque attack.

Propper’s book can serve the concerned African countries a reference to the fact that intolerance might seem appealing in the face of terror, however, paying intolerance with more intolerance will only lead to catastrophe as we’ve seen in Sri Lanka for instance. As a Jew, Popper witnessed first hand Adolf Hitler’s anti-semitic campaign in Nazi Germany. This might explain why he was strongly against the preaching of intolerance or hate speech. Popper emphasized the criminalization of intolerant preaching, which is among the factors that have easily led to extremist attacks in places like Somalia, Nigeria, and Kenya. He described preaching intolerance, as an incitement which should be criminalized just like an “incitement to murder.”

It may seem that such a policy could have prevented Nigeria from the terror of Boko Haram. However, Boko Haram only became a terrorist group after its first leader, Muhammad Yusuf, was extra-judicially murdered by the Nigerian police; The police obviously had no tolerance for the intolerant in this case and it backfired on the country. 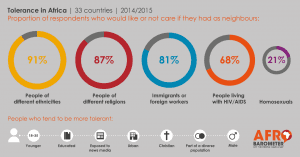 Why is ‘Tolerance’ so Complicated?

‘Tolerance’ itself is a twisted word. The Oxford dictionary defines it as “the ability or willingness to tolerate the existence of opinions or behavior that one dislikes or disagrees with.” For example, an individual may dislike or disagree with another person’s culture but the individual that disagrees has to publicly tolerate such culture as long as the culture does not in itself, harm anyone else.

However, if the definition of tolerance is extended to include tolerating behaviors that put others in harm’s way, then one can see why Popper, will advocate for policies that set a limit.

If someone calls for violence on others, such action will be a threat, and it should be treated as such. In Nigeria and in most of Africa, street preachers openly declare that people of opposite faith will go to hell and that believers should not associate with unbelievers. Such preaching can easily be classified as hate speech or inciting intolerance. While one may wish to discourage such preaching, if the preaching is criminalized, it may lead to a bigger crisis as religious people will see it as an infringement on their freedom of expression.

As many African countries such as Nigeria, Somalia, Kenya, and South Africa face hate-related crises, citizens and institutions need to promote voluntary cooperation and non-aggression as the key attributes for all social interactions. Private citizens should retain their freedom of expression as long as they do not harm others. They should be able to freely choose their association.

Promoting the intolerance of the intolerant is only an encouragement for aggression and it will likely lead to ugly consequences as people throw the intolerant label at one another.  A Senegalese proverb humorously puts it in a more personal perspective:

The day a mosquito lands on your testicles is the day you will know there is a better way of resolving issues without using violence.

Feyisade Adeyemi is a Writing Fellow at African Liberty. He is Academic Director at African Students for Liberty and teaches African Ideas of Liberty on Udemy. He is on Twitter @Thisischale